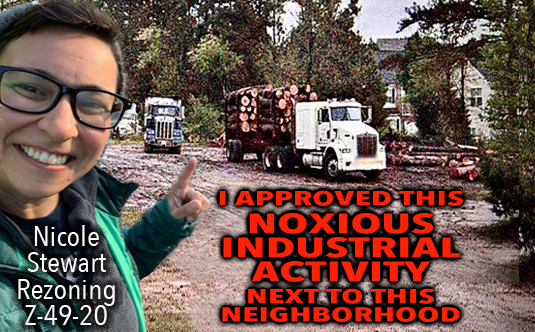 Mayor Pro Tem Nicole Stewart began a recent self-promotional blog by asking how we can “work together to build housing that is both good for our people and better for the environment?” Based on Stewart’s voting record, she doesn’t know the answer. In fact, Raleigh residents are routinely shocked to find how little she understands about what is good for either our neighborhoods or our environment.

Stewart could start by actually trying to work TOGETHER with neighborhood residents and by lifting up their voices. Instead she and the council majority seem to be listening only to the development community, based on her votes on recent rezonings including Azalea Falls and Shelley Lake, not to mention her recent push to legalize an illegal and noxious industrial operation to continue in a residential neighborhood.

Stewart and the council majority made it much more difficult for residents to engage with developers to try to work out win-win scenarios when they withdrew support from the CACs.

Stewart then goes on to cite her “entire career working for an environmental nonprofit” without clarifying that her career is as a fundraiser and not a policy expert.

Few of the things Stewart champions are actually helping with housing costs. And in many cases they are actively harming the environment.

None of the density she supports has resulted in AFFORDABLE density. So not only is sprawl not being controlled, but increasingly poor people, people of color, and other marginalized communities are the ones being forced out of their communities. This means the burden of commuting great distances to work falls disproportionately on them because they can no longer afford to live in Raleigh. And it increases our dependence on cars because when you put density everywhere instead of focusing it along transit corridors and areas designated by our Comprehensive Plan for growth, it becomes cost-prohibitive to build an effective mass transit system.

Stewart then relates an encounter with Bonner Gaylord, former Councilor and longtime employee of Kane Realty, one of the largest real estate developers in the area. She takes his comments that he “cares about the environment” at face value and considers that maybe not all developers are “in it just for the profit.”

John Kane has acknowledged that the workers at his North Hills shopping center can’t actually afford to live anywhere near there. But rather than be a leader and set an example by including affordable housing in his development, he claims he can’t afford to be put at a competitive disadvantage with other builders were he to do that.

Kane has said he wants the General Assembly to require inclusionary affordable housing to set a level playing field. Well guess who is a big donor to the power structure in the NCGA and who is rumored to be able to influence legislation? If Kane really wanted something like that, it would be a done deal!