In the “Save Shelley Lake” rezoning case, will Council do its job? Does it even know what its job is? (Councilor Buffkin: This mess is on you.)

As a member of the Raleigh Planning Commission, I voted against the rezoning case Z-41-19, AKA the “Save Shelley Lake” case. I was one of two members to do so. The other was our chair, Edie Jeffreys. We were out-voted 6-to-2.  The PC vote was a recommendation to City Council. They have the final say on all rezoning applications. 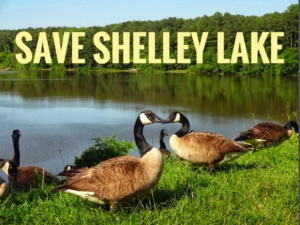 More below on my reasons for voting no, along with a compromise I suggested.

[For background, see ABC-11’s story: “Save Shelley Lake”: Fans rally to save popular Raleigh park from a proposed development.]

But first, a few words about the dilemma our rabidly pro-development Council, and especially District A Councilor Patrick Buffkin, is facing with Z-41-19. They’re itching to approve it, that’s clear. (All but District B Councilor David Cox, who’s strongly opposed.}

But are they really going to OK this development — at this scale — over the objections of literally thousands of neighbors who live near the lake or visit it regularly? Are they that dismissive of people’s quality of life?

Are they that much in the development industry’s pocket?

Do they even understand that this rezoning is not an “All or Nothing” choice, and that compromise, in the middle, is possible? 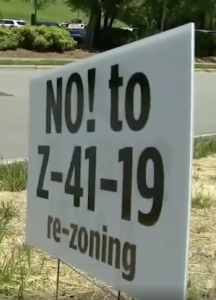 More than 5,000 people have signed petitions against the rezoning.

We have an 8-member City Council. Five of the 8 are brand new, including Mayor Mary-Ann Baldwin. These 5 and one holdover, Councilor Nicole Stewart, were elected last October with enormous financial backing from the development/construction industry. The industry tarred several of our now-former Council member as reactionaries for caring about the character of neighborhoods, while they touted their own candidates as progressive “reformers.”

Damaging impacts to neighbors are swept aside. Such neighbors, if they object, are slammed as “NIMBYs” — Not In My Backyard —  who care only for themselves. Oddly, the developers’ self-interest is completely justified. At least, as they see it.

Ordinarily, then, it would be the job of a conscientious City Council to mediate between profit-seeking developers and neighbors whose own property rights — and quality of life — are in danger of being trampled.

Council members would seek an outcome that allows the developer — another word for most developers is “speculators” — to earn a reasonable return on investment. Meanwhile, neighbors would be assured that the development, if it occurred, would enhance their properties, not detract from them.

It’s how development should work.

Rezoning cases are rarely All or Nothing. A lot of middle ground exists.

But, in Raleigh, regrettably, the new group led by Baldwin has shown zero interest in neighbors’ concerns, even in super-sensitive locations like Shelley Lake. They’ve been completely faithful to their development industry backers, approving rezoning cases at such a rapid clip, it’s not clear whether they even know they’re allowed to ask questions.

By the way, Edie Jeffreys and I asked lots of questions of developers when we were on the Planning Commission. Hence, we’ve both been purged by Baldwin & Crew. Two new members are in. We are out.

With that as prologue, I expected Z-41-19 to sail through the Council and be approved 7-1 (Cox dissenting). And last week, when it came up for public hearing, it seemed to have the wind at its back — no Council member, aside from Cox, asked a single question.

But then, after a perfunctory “hearing,” Councilor Buffkin suddenly announced that he was torn, and he wanted two more weeks to think about his vote. Whereupon the full Council held off making a final decision until June 16.

Obviously, Buffkin is feeling the heat.

Shelley Lake is in Buffkin’s district. If he supports Z-41-19, it’s going to cost him thousands of votes and maybe his seat. And he’s a brand-newbie.

Which leads to the question:

If Buffkin really wants a negotiated compromise, he needs to persuade two more Council members to want it too. (Remember,  Cox has already said he’ll vote no.)

My take: Mayor Baldwin is completely in the development industry’s pocket. Heck, they already pay her salary.

So Buffkin will need to recruit among the other 5 members: Nicole Stewart and Jonathan Melton, who were elected at-large; Corey Branch from District C; Saige Martin from District D; and David Knight from District E.

Buffkin needs two. Any two will do. And every one of them is potentially persuadable, if only because they may need Buffkin’s help in the future. And because Stewart and Melton, in particular, were elected citywide, which of course includes District A. The pair should be very reluctant to kiss off thousands of angry voters to side with one developer.

So, if he’s serious, Buffkin ought to be able to course-correct on Z-41-19, get negotiations started, and either reach a compromise solution or else sink the case and send the developer packing.

Which would make thousands of his constituents very happy.

If he isn’t serious, though, we’ll know it the minute an unchanged Z-41-19 is approved. 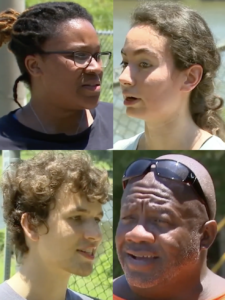 My reason for opposing Z-41-19 when it was in front of the Planning Commission? In a sentence, it’s too much density in the wrong place. As the late Councilman Thomas Crowder used to say, 10 lbs. of potatoes in a 5-lb sack.

This is a steeply sloping, wooded site that dives down toward Shelley Lake from a high point along North Hills Drive.

The developer wants to build 108 condominium units in 3- and 4-story buildings on about 6 acres of the site. Don’t be misled by the application that says 7.5 acres. The rest is almost completely unbuildable, and barely contiguous to the 6; just 4 additional housing units are ticketed there, bringing the total to 112.

I don’t believe the bulk of this site can be developed at a density of 18 units per acre (108 ÷ 6 = 18) without clear-cutting the area where the buildings will go. As a PC member, it wasn’t for me to know for certain whether clear-cutting would be needed. It was for applicant to specify that, if the rezoning were approved, he would for certain not clear-cut it. There was no such assurance offered.

Further, the applicant is proposing 3- and 4-story buildings. The surrounding area is predominantly built to R-6 density (6 units per acre), with 1- and 2-story townhouses and apartments dotted amongst the trees.

The character of this community, in other words, is a lake-shore mix of trees and low-density, low-slung housing that is, by midtown Raleigh standards, quite affordable. New development should complement what came before, not trample it.

I suggested a compromise.

I thought my compromise was pretty reasonable. At PC, though, the developer rejected it out of hand, in  the apparent belief that the new City Council, pro-development all the way, would let him build whatever he wanted to build.

He may well have been right.

Now that he’s jumped up on the deck, let’s see where Councilor Buffkin is taking us on Shelley Lake..