Nicole Stewart is No Environmentalist 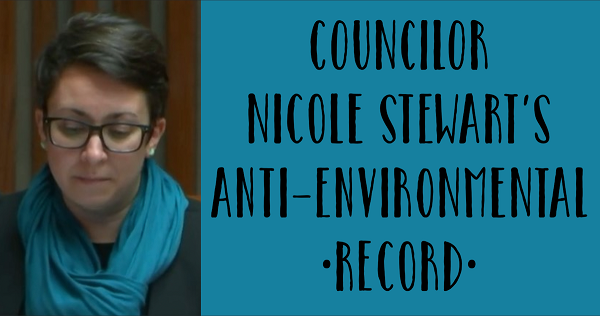 Mayor Pro tem Nicole Stewart has long been labeled the “environmentalist” on Raleigh’s City Council. Her career as a fundraiser for the North Carolina Conservation Network doesn’t make her a champion for the environment. It simply makes her successful enough at fundraising to benefit from a career in that field. We’ve examined her voting record on five big issues impacting our environment and natural resources and find Stewart to be far from the environmentalist she and others claim her to be. As this list shows, she has missed opportunity after opportunity to shine as a leader on the environment and help mitigate climate change while fostering smart development.

Click on the upper right + or – to expand or collapse each topic.

Without negotiating any quantifiable and verifiable conditions guaranteeing that the project reduce or eliminate chronic Walnut Creek flooding in downstream Black neighborhoods, Stewart voted, in a specially called, expedited meeting, FOR rezoning requested by developer John Kane. A true environmental leader would have sought to set a new standard for sustainable development for the largest floodplain-straddling development ever in Raleigh. Stewart could have called on staff to bring forward their best quantifiable and verifiable Performance Zoning Conditions that would remedy the painfully documented persistent and destructive environmental and social injustices in the Walnut Creek floodplain. Videos of recent flooding needing remedy: Watch here

The significance of ‘Performance Conditions’; is that they don’t require the development’s ultimate impacts to be known up front – which is the excuse Bonner Gaylord, Kane representative, used for why they couldn’t commit to real stormwater zoning conditions. Performance Conditions define how downstream conditions will perform for any development related to the rezoning. So instead of saying: the developer must build a stormwater retention pond of size X to handle development impacts of Y, a performance zoning condition would say: Whatever gets built related to this rezoning, its mitigations will forever perform so that stormwater and flooding conditions will always meet that downstream performance standard. A simple example would be: limiting downstream stormwater water flows so that they never exceed some FEMA designated limit.

Also noteworthy about Stewart’s vote to approve Kane’s rezoning request here: staff CLEARLY stated the Downtown South project is not in keeping with the city’s Comprehensive Land Use plan. Rather than negotiate with Kane to improve the proposal and possibly make it work within the guidelines of the Comprehensive Land Use Plan, Stewart went the way of rezoning. Stewart and a majority on Council also completely dismissed their own Planning Commission! The Planning Commission voted unanimously to DENY the rezoning request and resubmit it as a Planned Development which would allow for more details. It’s important to understand this Planning Commission was previously scrubbed of any members critical of the Baldwin Council, and yet the commission still recommended denial of Kane’s request.

No Meaningful Opposition to the RDU Quarry

Stewart has said privately and publicly that she opposes the proposed quarry at RDU. However, when given the opportunity to push council on a meaningful resolution objecting to the quarry, Stewart chose the easy way out, rather than leading for the good of the environment. She settled for a resolution that didn’t say much of anything, leaving The Odd Fellows Tract, the most significant natural resource threatened by the quarry, without Stewart as a real advocate on council.

Stewart joined council member Patrick Buffkin (the project is in his district) in voting in favor of a rezoning at Shelley Lake that could clear-cut ~6 acres of a wooded site on a high point along North Hills Drive. Buffkin, along with at-large member Jonathan Melton, claims there’s a condition in the rezoning that provides a “buffer” between the development and the lake. It does not. Furthermore, the development is not on a transit corridor or a growth center. Nearby residents presented council with more than 8K signatures asking council not to approve this rezoning, yet Stewart, Buffkin and 5 other members ignored them. What was also ignored were concerns raised by some members of the Planning Commission at the time- not just concerns, but alternatives for council to consider. Alternatives that could have mitigated the environmental impact on this beautiful and popular natural resource. Another example of Stewart missing the opportunity to shine as an environmental leader.

Unless you’re a regular reader of this blog, you’ve likely never heard of Azalea Falls. This beautiful piece of land located off Duraleigh Road abuts a property slated for development thanks to a 2020 council vote, including the support of Stewart. That property sits atop a hill that will be graded for development and the runoff will negatively impact Azalea Falls, if not completely destroy it. The 10 acre Azalea Falls parcel is held in trust for the benefit of future Raleigh generations by the nonprofit City of Oaks Foundation and will be donated to Raleigh in 2052 to complete the citywide greenway connection to Umstead State Park.

Azalea Falls is currently closed to the public but because of its environmental significance, was listed on the Natural Heritage Registry by the NC Department of Natural and Cultural Resources. The proposed development here, has a walkability score of ZERO and is totally car dependent. Raleigh’s long range plans call for NO bus service in this area and call for focusing density near downtown, near transit, and near walkable community centers. Instead of being density that will fight climate change, this location will exacerbate it by adding more air pollution, more toxic parking lot runoff and a downward spiral of more road congestion and more road widenings – all anti-environmental outcomes

Stewart could have led here by asking for an environmental impact study or seeking input from the Sierra Club.

The city’s initial plan for this needed upgrade required taking land from homeowners to upgrade the existing line. Landowners questioned the need and why the line couldn’t be moved toward the now dry Brentwood lakebed to avoid taking their land. After city staff conceded the sewer line COULD be moved away from two of the homes to avoid taking the land, Stewart REFUSED to allow the homeowner the dry lakebed owner to speak at her Growth and Natural Resources committee meeting in late January 2020. The new location, away from the two homes, would NOT BE in the designated wetland area and this move would have also saved the city money and eliminated the requirement to clear cut the trees and wildlife habitat. Instead, Stewart led the effort to keep the planned sewer line in the path that required taking land from the homeowner and clear cutting the trees. It is commonly understood that MORE trees will be needed to help in the fight against climate change. How is this an example of someone acting as an “environmentalist”?