Feb. 4: One Year Today Since the CACs Were Gutted by Mayor Baldwin’s Council, and Still No Replacement In Sight 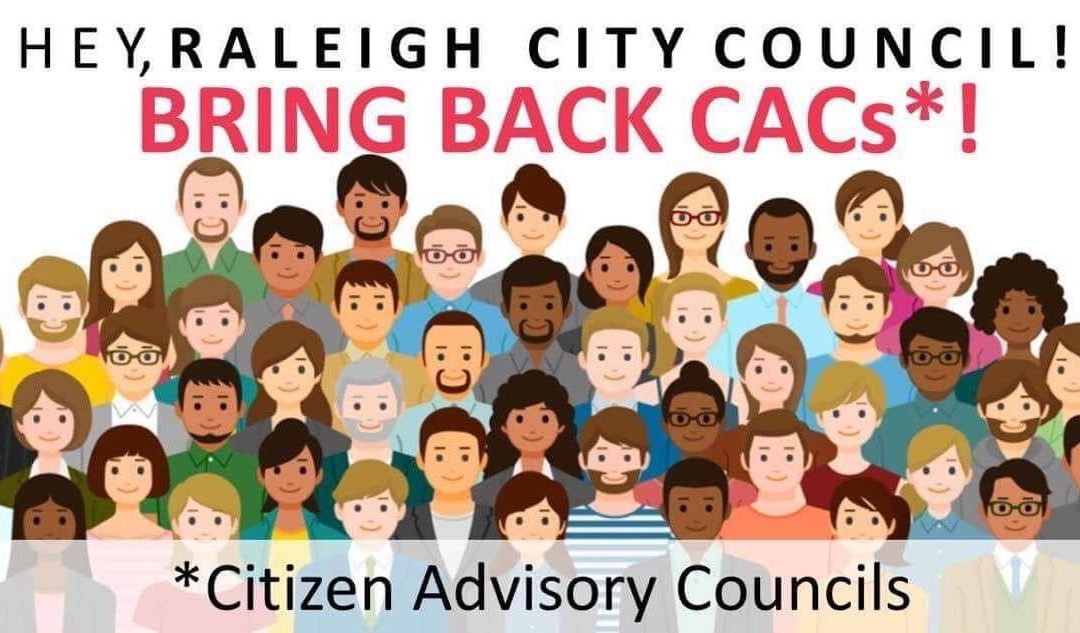 Today, February 4, is exactly one year since Mayor Baldwin and her City Council mates voted to gut the 18 Citizens Advisory Councils, leaving Raleigh without any functioning system for bringing citizens into city government.

You may recall that Baldwin launched her attack on the CACs without any public notice or opportunity for public comment, even to the point of hiding it from the Council’s agenda that day. Her henchman in the plot, the soon-to-be-disgraced former Council Member Saige Martin, was full of dishonest froth about how Council would soon replace the CACs with a “revolutionary” plan for citizen engagement.

Guess what? One year later, NO revolutionary plan.

In fact, one year later, NO PLAN WHATSOEVER.

Just a big empty hole where citizen engagement is supposed to be.

A consultant, Mickey Fearn of N.C. State, was hired by Council to advise them how to improve citizen engagement. His 10-month, $72,000 contract calls for specific recommendations on a new methodology. It’s now Month 9. Nothing yet from Fearn. And no sign that Baldwin cares.

So what was this all about? No question, the point was to remove citizens from all decisions regarding development in Raleigh, leaving the development industry in complete command. Baldwin and her allies were swept into office in 2019 on a tidal wave of campaign money from the industry. The industry wanted citizens to get out of their way. It’s really that simple — and that appalling. More on this subject below.

To their credit, some CAC members are soldiering on, and 8 or 9 of the CACs continue to meet — in virtual meetings due to COVID-19 — though without city support or formal connection to the Council. But few if any of the 8 CACs that were black-led, and were located in predominantly black neighborhoods, survived the Baldwin Putsch.

All the avenues for black and brown input, in other words, are shut off.

The Council’s only black member at the time, Corey Branch, whose District C is historically African-American, voted against dumping the CACs, along with white District B Council member David Cox. They were out-voted 6-2.

(Cox, the only outspoken CAC proponent, wasn’t told in advance what Baldwin, Martin and the rest had up their sleeves. Branch was told, but agreed to keep the dirty little secret from Cox and the public.)

Since that vote, Martin has departed from Raleigh and his replacement, hand-picked by Baldwin, is a second black member, Stormie Forte. Neither Forte nor Branch has made any move to restore the CACs.

Council members Melton, Stewart, Buffkin, and Knight sided with Baldwin and against the CACs.

As for removing citizens from development issues, it’s not just the CACs that were muzzled. Since taking office, Baldwin and her allies have routinely ignored the recommendations of their own advisory Planning Commission if the PC vote isn’t in favor of a developer’s project.

The PC, for example, voted unanimously to oppose the giant Downtown South project on grounds it was too vague and did not include sufficient community benefits.

Council’s reaction: It held a hurry-up meeting to approve Downtown South on a 7-1 vote, with Cox dissenting.

And it’s not just development issues. The Council committees used to be venues for citizen input on a broad range of subjects. Under Baldwin, they barely function, and citizens are not heard. Advisory commissions and boards are little more than rubber stamps for city staff.

In a democracy, what citizens think is supposed to count. In Raleigh government today, it doesn’t.