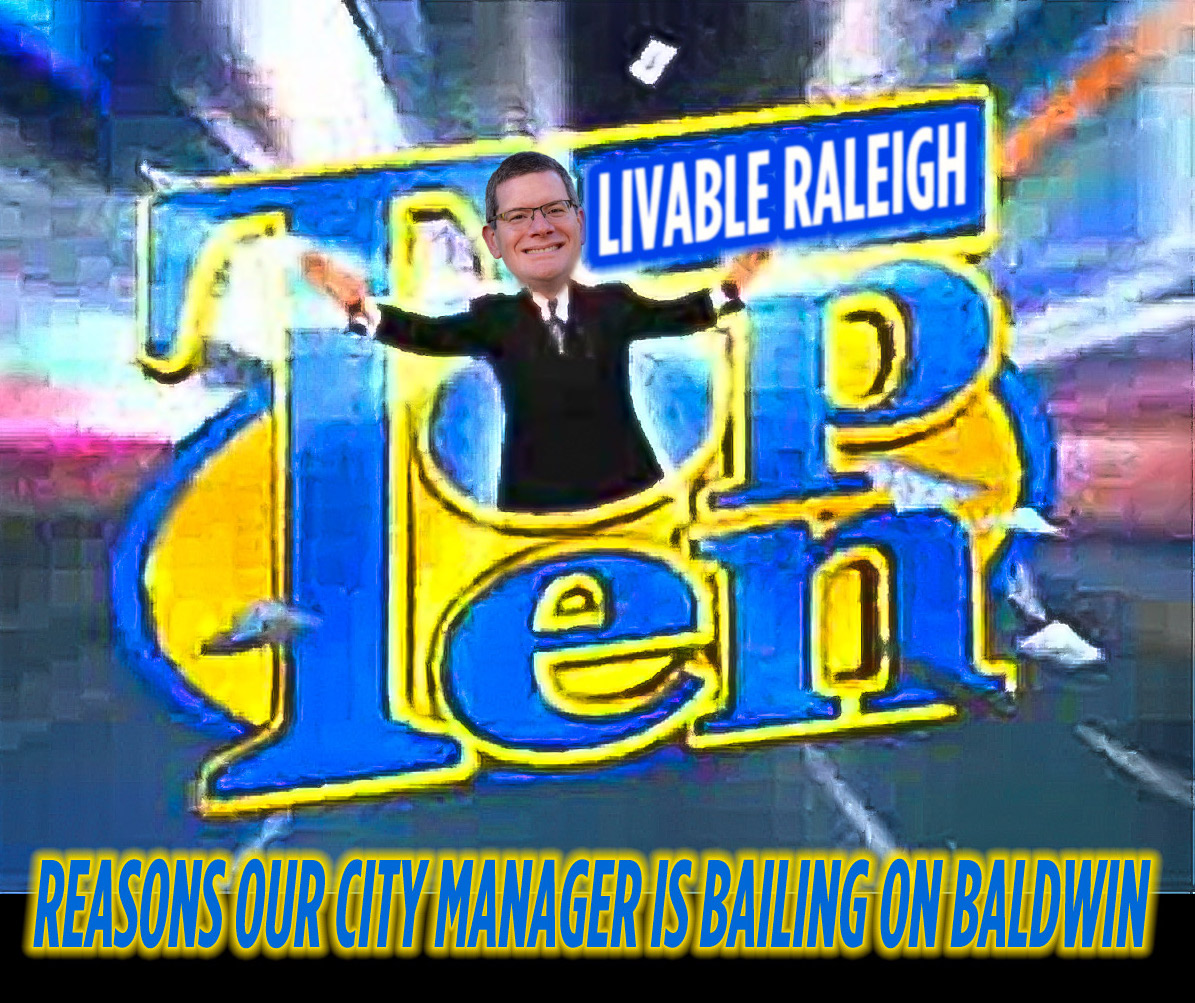 Ruffin Hall, Raleigh’s mild-mannered City Manager, up and resigned on Wednesday, mid-pandemic. With no explanation except the classic “he’s looking for new challenges.”

Asked if he has another job lined up, he said no.

Ruffin is 50. He is married and has a family. It occurred to us that a careful bureaucrat like Ruffin wouldn’t quit his high-paying gig, with Raleigh in turmoil, and the city looking to him for leadership — and with no new job lined up — unless the working conditions at City Hall were intolerable?

Which, given the mayhem on City Council and the, uh, off-putting presence of Mayor Mary-Ann Baldwin, they very well may be.

10That soccer stadium. Ruffin knows it’s a waste of money. But Mayor Baldwin has promised it to her patron, uber-developer John Kane, and she keeps shouting in Ruffin’s ear.

9With Baldwin determined to give every developer free rein, the stress on Raleigh’s infrastructure is at the breaking point. Ruffin’s a numbers guy, he sees the tax rate spiraling higher in coming years, while city services deteriorate.

7Baldwin was literally asleep as downtown Raleigh exploded on Night 1 of the George Floyd protests. The police chief reports to Ruffin; the two of them took the heat for the tear gas/riot gear response. The mayor: MIA.

6A day later, on the infamous Night 2, Baldwin refused to establish a curfew, and the destruction escalated. Again, Ruffin and the police chief took the heat as downtown Raleigh was laid waste.

5After that, Baldwin handed her gavel to since-departed Councilor Saige Martin to conduct a special police-bashing session for angry protesters. Martin ran it like a game show, smirks & all. Ruffin was put in the corner, a hapless bystander. Probably didn’t feel good since, as noted, the police report to Ruffin.

4Baldwin’s $80 million bond issue for affordable housing is a blank check. She wants the voters to pass it, and she’ll get back to them on how it was spent. She was visibly steamed, therefore, when Ruffin sided with Councilors Cox and Branch, who want the spending policies set BEFORE the bond issue goes to the voters.

3 Ruffin had his staff working closely with the Citizen Advisory Councils, because it’s better if citizens know how their government works. Oops! Baldwin, with Saige Martin as her tool, summarily abolished the CACs, with no advance notice and no debate allowed. So much for citizen engagement. (6-2 vote; Cox and Branch voted no.)

2 Baldwin’s job with Barnhill Contracting is a big screaming conflict of interest, for her and for anyone else in city government who gets caught in their mess. Ruffin doesn’t want to go to jail.

And, THE NO. 1 REASON RUFFIN HALL IS LEAVING:

Ruffin Hall is the ultimate team player, who shares the credit and shoulders the blame. Baldwin is the ultimate me-me-me politician, quick to take credit, but a hot temper when things go wrong. And right now in Raleigh, what ISN’T going wrong?

Then again, Ruffin may see the handwriting on the Election 2021 wall if the unpopular Baldwin is voted out and her Council allies go down with her. A new Council might choose a fresh start with a new Manager.

Better to get out of Dodge while the getting is good.

Maslow or Moonshot? Sign up by Friday to weigh in at the 6/2 Budget Hearing 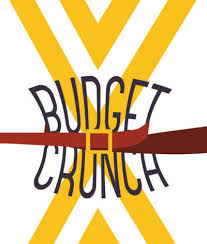 If you live in Raleigh, then both the City and County budgets will impact you, your health and well-being, and your finances. Those budgets will also reflect how we feel as a community about our fellow residents, especially those who are struggling to keep from being pulled under by the pandemic’s destruction.

Maslow’s hierarchy of needs (https://www.simplypsychology.org/maslow.html) reminds us to focus on basic needs like food, shelter, safety and security before we move on to other priorities.

That’s more important than ever now that the COVID-19 pandemic has shredded our community, leaving many struggling to meet those basic needs. And placing additional burdens on our already strapped school system to operate in this new reality.

It’s commendable that neither the City nor the County budget calls for a tax increase, however the City’s budget does include a $2/month increase in recycling fees to cover increased costs. And Raleigh’s mayor has floated the idea of a tax increase (approximately $17 for a median home valued at $255,000) to fund 50 additional police officers and firefighters.

The City also is considering an Affordable Housing bond that might result in a tax increase, although that increase would not go into effect for another year.

There’s no argument that our first responders need more resources. There’s no argument that affordable housing is a high priority for our community, but the affordable housing bond proposal is nothing more than a warmed-over package presented to council years ago that is not responsive to the unprecedented suffering of Raleigh residents today. The process for developing the bond proposal lacked robust public input and the proposal itself lacks any concrete commitment to COVID-19 crisis needs, which will surely be with us for a long time to come.

What we need is a real moonshot budget that prioritizes Raleigh Human Services and an Affordable Housing bond that deals directly and effectively with the horrifying impacts of the COVID-19 pandemic, which are tearing at the fabric of so many Raleigh lives, particularly the lives of homeless mothers and their children.

So if we want to concentrate on basic needs like affordable housing, education, and safety, what other options do we have for funding beyond tax increases?

The City of Raleigh has long enjoyed very favorable (AAA) bond ratings that allow us to borrow money at the most attractive interest rates. This is largely because of funds we have in reserve – kind of a like a rainy day savings account.   However we have considerably more in our reserves than is necessary to maintain that AAA bond rating. If there ever was a time to spend down some of the money in that rainy day fund to increase our provision of human services, this is it!

The City budget also includes a 2% pay increase for all employees in January. While our City employees work hard and are certainly deserving of annual pay raises, maybe this is the year to skip those raises, as Wake County is doing. Or maybe this is the year to exempt more highly paid staff from receiving raises. The coming recession is predicted to be worse than in 2008-2009, when there were no staff raises. Rather than prioritize raises, shouldn’t we be prioritizing more help for families, children, and others who are in desperate need now?

Let’s focus on satisfying our community’s increased basic needs, without burdening Raleigh residents, by reprioritizing and redeploying some of our resources to that end.

Maybe it’s time for Council to consider more financially sustainable and equitable approaches to waste and recycling services, such as Raleigh’s tier water rates, which are tied to service volumes.

If there ever was a time for Council to be bold and innovative in envisioning a moonshot budget, it is now, at this unprecedented time of crisis and need for so many Raleigh residents.

You can sign up to speak at the June 2nd public hearing by 5pm Friday, May 29, at https://raleighnc.gov/services/government/public-hearings-city-council-sign-speak

You can submit written comments up to 24 hours after the hearing.

You can learn about the County budget and submit comments here: http://www.wakegov.com/budget/fy21/Pages/default.aspx