David Knight, Trying to Have it Both Ways on the Quarry, Fails His Constituents and His Convictions 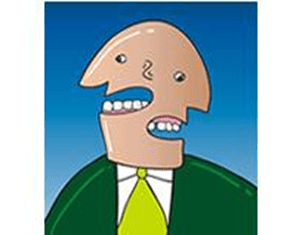 As a candidate for City Council, David Knight campaigned on opposition to the RDU Quarry.  He made his position clear in statements to both INDYWeek and the News & Observer. 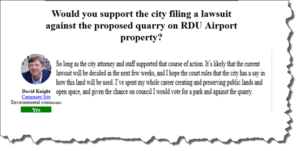 Note that in both position statements he says:

“given the chance on council I would vote for a park and against the quarry”.

Unfortunately he has been given at least two chances to make good on his campaign promises and has failed his constituents and his own convictions both times.

1 First Chance: On Tuesday evening, May 5th, during the Council’s public comment session, three citizens called in (it was a virtual meeting) to ask that the Council take a position in opposition to the Wake Stone mining permit and request that the state Department of Environmental Quality conduct a public hearing to take testimony pro and con.  Councilman David Cox made a motion that Council do what the citizens asked: Oppose the permit, and request a hearing. Cox, of course, is an outspoken opponent of the quarry.  Councilor Knight refused to support this motion.  City Council Finds New and Novel Ways to Do Nothing About the RDU Quarry

2 Second Chance: On June 16, after the NCDEQ had already decided to conduct a public hearing, Councilor Stewart brought forth a formal statement for consideration by the council.  Nowhere in this statement was there any mention of opposition to the quarry by the council.  It simply asked the DEQ to do what they were already scheduled to do.

We, as a Council, therefore urge the Department of Environmental Quality and the Division of Energy, Mineral, and Land Resources to hear and seriously consider the comments and concerns of these residents.

Note that Stewart’s statement only mentions the concerns of residents and not any concerns of the City Council.  Councilor Knight, who now says he is actually opposed to the quarry, seconded Stewart’s motion noting that to him, it was important for the council to speak “as a body”.  Of course, that meant speaking with no conviction and simply asking NCDEQ, NC Department of Environmental Quality, to do what they had already committed to doing.  Councilor Cox stated he would NOT support the statement because of its lack of actual opposition to the quarry and voted against it.  Knight could have also voted, like Cox, with the courage of his convictions.  He declined to do so.  The council speaks “as a body” not only with a unanimous vote, which they didn’t get here anyway, but with a majority vote.  Speaking “as a body” should not mean watering your policies and resolutions down to a point where they say nothing of consequence so that everyone can feel comfortable getting on board.

When Knight ran out of chances to take official action as a City Councilor and thought it looked like he was going to be on the wrong side of history, he decided to be bold.  He wrote a “sternly worded” letter in his capacity as a citizen.  Of course this carries none of the weight that a resolution in opposition from the City Of Raleigh would carry since Raleigh is one of the four named owners on the deed to the land.  The other three being Wake County, the City of Durham and Durham County.

On July 17, 2020, David Knight submitted that letter to NCDEQ, NC Department of Environmental Quality, voicing his opposition, as a citizen and not as a member of Raleigh City Council, to the RDU Quarry.  In this letter he notes that he shares:

“the concern of thousands of Triangle citizens who have publicly voiced their opposition to the project”.    Knight’s letter to NCDEQ

David Knight should be ashamed of himself. If this letter reflects his actual convictions on the quarry, then why did he vote against his own convictions and in favor of the “weak tea” statement approved by the Raleigh City Council? A statement that NEVER once mentioned opposition to the quarry by the council.

Or, does he believe his job on City Council is to provide cover for Mayor Baldwin and Councilor Melton?

Six of the eight members of council (while Saige Martin was still a councilor) campaigned on their opposition to the quarry. The City Council had enough votes, based on those published campaign positions, to approve a strong statement in opposition to the quarry. As Knight says, to speak “as a body”.  But, it would not have been a unanimous position and would have forced both Baldwin and Melton to vote against the statement since both of them favor the quarry.

In order to stop any embarrassment to Baldwin and Melton, Knight set his own convictions and the desires of his constituents aside and voted for the weak, non-opposition statement written by Nicole Stewart as a CYA (cover your ass) gift to Mayor Baldwin and Councilor Melton.

Now Knight’s constituents have many questions to ask themselves: