The cost of a TIG…. Millions and Millions? Not according to Mayor Baldwin 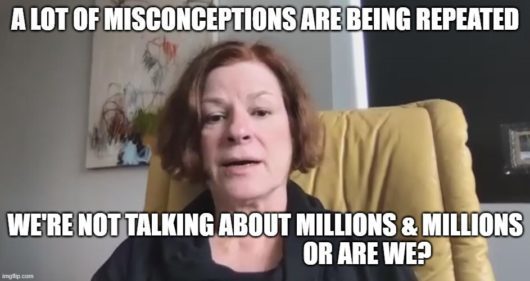 At the March 2 evening City Council meeting during Public Comments several speakers addressed the Tax Increment Grant, or TIG, that Kane Realty has requested for its Downtown South project. Mayor Baldwin was frustrated by the figures being quoted by these speakers, including Livable Raleigh’s Chair, Susan Maruyama, and decided she simply had to interject.

Mayor Baldwin said “a lot of what was spoken to or said tonight is not at all accurate.” She went on to say “we’re not talking about 30 years” and laughed mockingly when she said “we’re not talking about millions and millions of dollars” as though the concept was ridiculous on its face. She continued saying “there’s a lot of misconceptions out there that are being repeated” and “maybe we need to get the facts into some peoples’ hands”.

You can watch her statement here:

If you have followed our blogs on the topic of Downtown South and the proposed TIG, you are probably aware that we have published data citing a possible total of $450 million for the cost of Kane’s TIG. Kane has requested the TIG for 30 years and he has requested it from BOTH Raleigh and Wake County. He has requested the TIG be a 75% reduction of the property tax that would otherwise be owed. Based on actual property tax rates for the city and the county and a project valued by Kane at 2 BILLION dollars, the TIG would reduce Kane’s property taxes by $15 million per year for 30 years. That is a total of $450 million. Of that total, $300 million would come from Wake County and $150 million would come from Raleigh.

Now let’s do the calculations for Raleigh’s portion of the TIG again and use the figures that are recently available from a DRAFT proposal by city staff for what a TIG policy could look like. Again, this is an initial draft. It is NOT an approved city policy, it is NOT what Kane Realty has asked for and it does NOT include any money Wake County may approve.

This draft sets the TIG for 15 years instead of 30. And, it caps the maximum grant at 2% of the city’s tax levy. Using the estimates for 2021 property taxes, that comes to a $5.1 million tax grant per year. So, for 15 years that is a total of $76.5 million. Now, I don’t know about you. But, to me $76.5 sounds like MILLIONS and MILLIONS despite any claims to the contrary made by the mayor. Also, if you compare this number for 15 years to our earlier number for 30 years of $150 million for the city portion, our estimates seem to be right in line.

After the council meeting I wrote to the city manager for confirmation of this calculation based on the draft policy and she responded confirming this data’s accuracy.

Lastly let’s consider this. We have a situation here where Kane has asked for a 30 year TIG which would cost $150 million in lost tax revenue to the city of Raleigh. We also have a draft proposal from staff presented to council for a 15 year TIG capped at 2% of tax revenue which would cost the city $76.5 million.

When Kane asks for a TIG for 30 years and staff presents a draft proposal for a 15 year TIG, do you have any confidence in which one council might go with?

Despite any protestations from Mayor Baldwin, Livable Raleigh is NOT misinforming anyone about the possible costs of a TIG for Kane’s Downtown South project. And, yes, it certainly will be MILLIONS and MILLIONS even if the proposed draft from city staff is what is adopted.

We patiently await Mayor Baldwin’s apology for accusing us of spreading misinformation. But, we will not be holding our breath while waiting.