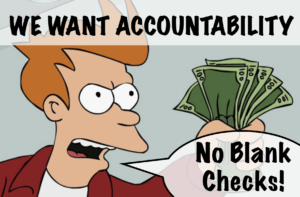 Raleigh’s Affordable Housing Bond Lacks Assurances That Our Most Pressing Housing Needs Will Be Met.

When Durham’s Mayor Steve Schewel was invited to address the Raleigh City Council last December, he emphasized his council’s two ‘crucial’ steps that ensured Durham’s successful $95M Affordable Housing Bond*. First, Durham listened closely to the community’s needs. Second, Durham promised a comprehensive set of bond programs, with itemized funding amounts and specific unit production and rehabilitation commitments. Durham’s commitments go beyond housing, to include eviction diversion, job training, neighborhood stabilization and more**.  According to Schewel, these are the guarantees that earned the trust and support of Durham voters. Just as importantly, they are the commitments that will hold the Durham Council accountable for real results.

By comparison, Raleigh’s bond package approved by Council is a bare-bones outline, with the largest share of funds going to undefined development partnership deals. Raleigh’s package is completely lacking in commitments to the number and type of units that will be produced, and to crucial services found in Durham’s bond. At Council’s June 2 meeting, Raleigh’s Mayor argued against adding commitments, which would reduce the ‘flexibility’ of how the $80 million is spent . That lack of accountability is exactly what Durham’s Mayor Schewel warned against. As Councilor Cox suggested, without the accountability of clear commitments, Raleigh voters may be unwilling to write this Council an $80 million ‘blank check that will inadvertently lead to more gentrification’.

The matrix below compares commitments contained in Durham’s Affordable Housing Bond** with Raleigh’s current bond package.   (See below for more details about both bonds.)

When they voted to move forward with the bond on June 16, three Raleigh City Councilors: Branch, Cox and Martin, pledged to solicit input from residents and amend the Bond over the next 1 to 2 months to meet the community’s greatest needs. The others were either silent, except for Baldwin and Buffkin, who opposed substantial added commitments.

BOTTOM LINE: Durham has provided a ‘crucial’ roadmap for Raleigh’s successful Bond in November. Follow their lead with commitments and accountability.

* The ‘Two Crucial Steps’ needed to earn the trust of voters are described by Mayor Schewel at Raleigh Council’s Dec 17 Worksession (at 52:30 of video):  (http://raleigh.granicus.com/MediaPlayer.php?view_id=5&amp;clip_id=6381)

Raleigh’s Critical Housing Needs are described in Raleigh’s federally-mandated Consolidated Plan. Raleigh’s proposed Affordable Housing Bond SHOULD commit to focusing on these needs, but it does NOT.  https://cityofraleigh0drupal.blob.core.usgovcloudapi.net/drupal-prod/COR19/Draft5Year%20ConsolidatedPlan20212025.pdf

Consolidated Plan Excerpt: “The primary housing need for Raleigh’s low- and moderate-income residents remains finding rental housing that is affordable. Raleigh’s rapid growth has resulted in rising land values and housing costs, while incomes for lower-wage earners have failed to keep pace. Very-low (50% AMI) and extremely-low (30% AMI) income households are most affected, with 16,685 extremely low-income households experiencing severe cost-burdens, spending more than 50% of their income on housing and utility costs. An influx of high-paying jobs and demand for housing near the city center has resulted in many once affordable areas being redeveloped into higher income neighborhoods.