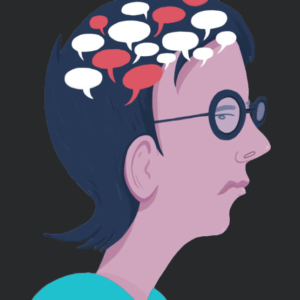 Nicole Stewart consistently uses coded language such as ‘right-sizing’ voices to find ‘the right voices’. Her code words sound vaguely progressive, but her motive is not to expand and empower all voices, but to conceal and distract from her real political motive: to silence voices she doesn’t agree with. Here are several examples:

On July 1st, Councilor Stewart tweeted her priorities in soliciting applications to fill the City Council District D seat left empty with the resignation of Saige Martin. Nicole’s tweet announced her focus on ‘voices’.  In this case, diverse voices.  She said nothing about qualifications, knowledge of how Raleigh’s government works, an in-depth knowledge of issues affecting District D, or experience with Raleigh’s budget that will be under stress due to the economic impacts of COVID-19.

Lifting voices by silencing them

In one of the first acts of this council, on Feb 4th, Nicole joined the majority to abolish the nearly 50 year old Citizens’ Advisory Councils (CACs), in secret and with no public input.  No ‘voices’, you might say.  In her explanation for this action, she said she wanted to ‘right-size’ the voices being heard by the Council. She thought (in the absence of any corroborating data) that the active citizens who participated in CACs were too old, too white and too wealthy to be the right voices to listen to. And, to correct this perceived problem, she eliminated their voices by abolishing the CACs.
It has now been five months since the CACs were swept away and there is still no replacement for citizen engagement in sight.  The greatest irony of her action, as noted in the article linked below, is that the citizens whose voices she claims she wants to lift up are the Black communities who lost the most when CACs were abolished.  A full 40% of the CACs were serving majority Black neighborhoods. https://livableraleigh.com/citizens-speak-out-when-council-silenced-the-cacs-the-black-community-suffered-most/

Southeast Raleigh voices don’t count because their concerns are not shared citywide.

During last fall’s election campaign, Stewart appeared at a Council Candidate Forum on Oct 3, 2019.  In answer to a question about a Police Accountability Board, she told the group of concerned citizens that the only people in Raleigh who care about police oversight are those in District C.  Translation: I don’t care if District C residents in South East Raleigh want a police accountability conversation because District A in North Raleigh doesn’t see the need.  The voices she was hearing that night weren’t the ‘right size’.  https://youtu.be/h2bq_tic2Z4

Stewart doesn’t even allow some voices to speak.

When two citizens attended a Growth and Natural Resources  committee meeting chaired by Stewart to speak to an issue on the agenda, Stewart refused to let them speak.  She even refused to let another member of the committee speak on the topic.  The voices of those citizens were not the ‘right size’ and Stewart voted against the wishes of those citizens without ever allowing them to speak on the record.

Does Stewart hear the voices of an entire neighborhood?

When an upzoning case on Strickland Rd came before council, over 200 neighborhood residents spoke against it.  Their voices were not the ‘right size’.  So, Stewart didn’t hear them.  She voted to approve the upzoning.

Can Stewart hear the voices of environmentalists?

Are the voices the ‘right size’ when they come by the thousands?

In the upzoning case at Shelley Lake, nearly 9,000 people spoke out in opposition.  Once again, their voices were not the ‘right size’ and Stewart voted to approve the upzoning of the property from 24 residential units to 112 units.

Can she hear the voices of activists trying to save lives? 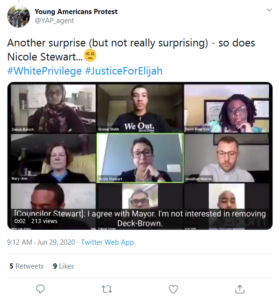 On Saturday, June 27, the Raleigh Demands Justice organization held a follow-up meeting with Mayor Baldwin, Councilor Stewart and Councilor Melton to discuss what actions would be taken regarding police accountability.  Stewart said she agrees with the mayor and is not interested in removing Police Chief Deck-Brown. The advocates voices were not the ‘right size’. The mayor’s voice was the ‘right size’.

Are you beginning to wonder what voices Nicole Stewart does hear?

Nicole Stewart is the City Council liaison to the Downtown Raleigh Alliance.  Stewart’s family derives much of its income from a downtown Raleigh business.  This function as a liaison would appear to be a large conflict of interest.  But, Stewart listens to the voices of the DRA, they are the ‘right size’.

Nicole Stewart consistently uses coded language such as ‘right-sizing’ voices to find ‘the right voices’. Her code words sound vaguely progressive, but as the examples above illustrate, her motive is not to expand and empower all voices, but to conceal and distract from her real political motive: to silence voices she doesn’t agree with.