The Raleigh City Council has a formal “Code of Conduct” which defines acceptable behavior for the councilors.  One section of the code defines how the councilors are expected to behave in interactions with the public.

CONDUCT WITH THE PUBLIC

Public meetings and hearings can be an unnerving experience for some people as they are appearing in an unfamiliar setting and for something that is important to them in their daily lives. Therefore it is important to treat every person appearing before city council with the following courtesies:

The full Code of Conduct can be found here

Twice a month, at City Council meetings, the public is given its only opportunity to interact with the full council during “Public Comments.”  Citizens are given up to three minutes, at maximum, to speak to the council on a topic of their choosing as long as that topic isn’t currently open for a public hearing.  Citizens sign up in advance to have an opportunity to have their say and to be listened to.  Due to COVID-19, current procedures require a citizen to sign up to speak by end of day the Friday before a Tuesday council meeting.  Citizens work hard to write their comments to be able to express their feelings in the allotted time.  As noted in number 2 above:

Be an active listener. The speaker is there because they feel strongly about the issue.  The respectful thing is to pay attention.

At a recent council meeting on Oct 20, 2020, the first speaker up, Chantelle Miles, spoke about Citizen Engagement.  But, before we get to Chantelle’s comments and how they were received, let’s start with Mayor Baldwin’s introduction to the Public Comments section of the meeting.

Mayor Baldwin asks the speakers to “Be respectful” and to “Be kind.”  But, do the councilors themselves take the Mayor’s admonishment to heart?  Are they respectful and kind?  You be the judge.

Watch the video of Chantelle Miles’ comments and watch Councilor Knight closely.  He pays absolutely no attention to Ms. Miles at all.  He spends the entire three minutes engrossed in other activities.  He appears to be monitoring and/or working on two other devices.  One to his left and one to his right.  View Ms. Miles’ Public Comment here.  She is the first speaker.

After listening to Ms. Miles’ comments you will note that she also addressed Councilors Buffkin and Stewart with a direct request about Councilor Buffkin’s recorded public town hall meetings and when those meetings  would be posted online for public access.  She asked each of these councilors to respond to her question about if or when the recordings will be posted.  To date she has gotten NO RESPONSE from either councilor. 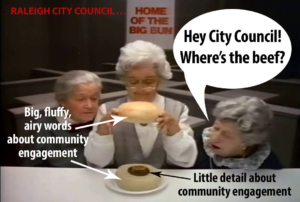 What you will also notice is that instead of a response to her direct questions of Councilors Buffkin and Stewart, Mayor Baldwin interjected with a bit of misdirection by recommending Ms. Miles watch the Council Work Session from earlier that day for an update on the city’s progress to create a new citizen engagement process.  Ms. Miles did NOT ask for an update on the city’s progress in creating a citizen engagement process.  What she did was address the public’s lack of trust in this council and the council’s lack of transparency.  She directly asked Councilors Buffkin and Stewart about their lack of transparency for not posting the recording of their Town Hall meeting on social media.  Ironically, the lack of access to recorded meetings was one of the failings they ascribed to the CACs as an excuse for dismantling them.    You can read our assessment of that earlier work session update in our report Where’s the Beef? 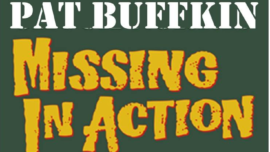 This issue of Councilor Buffkin’s lack of transparency is also not new.  We have reported on it before in Patrick Buffkin – Missing in Action

If you don’t have time to watch the full three minute video clip, here are some screen shots showing just how little respect Councilor Knight afforded to Ms. Miles.  Councilor Knight is in the second row from the top and the third position in that row.  Above and to the right of the time clock. 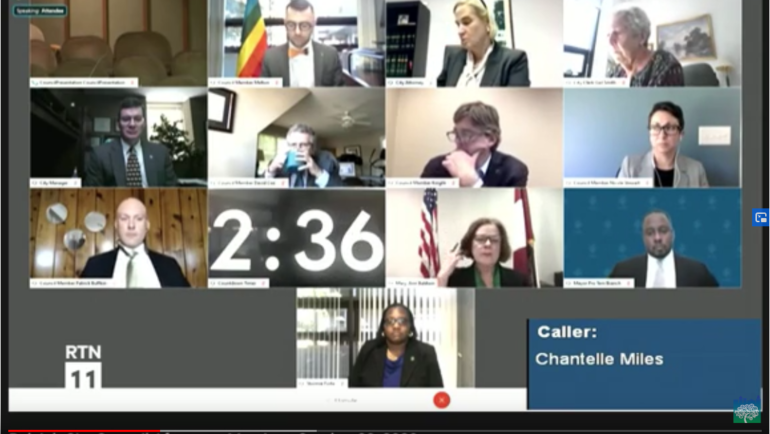 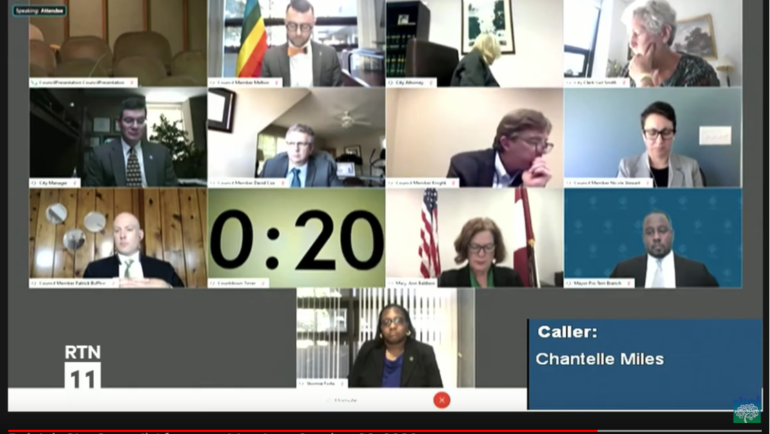