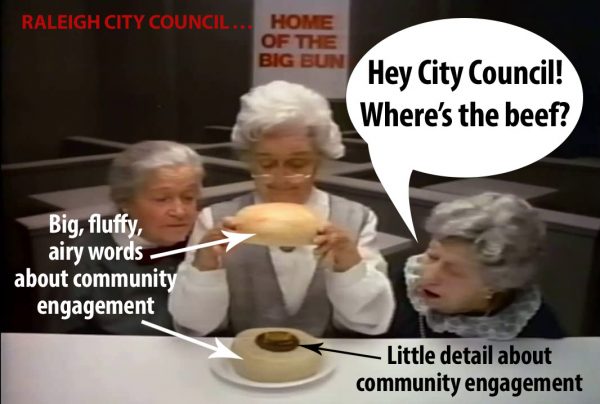 It has now been 260 days since the Raleigh City Council abolished its support of Raleigh’s CACs (Citizen Advisory Councils). This was done in a surprise vote on February 4th that was developed in secret, with no community engagement, and with a demand for no discussion by Council members during the voting process. After many months, the City finally signed a contract with consultant Mr. Mickey Fearn in early June, with the goal of reinventing the City of Raleigh’s community engagement system. We will soon be into the 6th month of Mr. Fearn’s contract. What has happened since this $72,000 10-month contract was signed? What objectives and goals have been met?

The answers are hard to tell from the City’s status reports and meetings. It’s also hard to find any details available to us citizens. From the City’s summary of Mr. Fearn’s contract to the latest status report available on the City’s website, what’s missing are the details. Where’s the substance instead of fluffy words in outline form? As it was said in a commercial from 1984, “Where’s the beef?”

There seems to be very little accountability and leadership at this point in Raleigh’s Community Engagement process. Meanwhile Raleigh residents are struggling without City support to keep our CACs alive. The mayor, Council and consultant have talked about doing proactive community engagement right NOW, and not waiting for Mr. Fearn to complete his 10-month contract. But we residents of Raleigh have seen very little action or results after 5 months. Instead of the real substance and the support we need, it looks like Raleigh’s Community Engagement process is being cooked up in the “home of the big bun.” We hear lots of big, fluffy, airy words about community engagement, but no meaty substance that will nourish our neighborhoods.

On September 8th, Mickey Fearn delivered his presentation on the progress of Raleigh Community Engagement to the City Council that included a PowerPoint presentation. After the PowerPoint, Mr. Fearn asked the Council, “but there is a point where we really need to talk about how it is you want to move forward and what kind of instructions you’re going to give to staff.”

To which the mayor responds, “Well I would like to see our staff start doing that. I mean I don’t think that we should be sitting still waiting for your deliverable. I think that we need to empower the staff to start moving forward, and bringing their ideas forward, and there are a couple of things in your presentation that I think we need some clarity on. You know you ask the question it’s almost like where does the buck stop? Who’s in charge? We need some clarity on that issue from staff, and then the other thing I wanted to ask you is what are you leaning toward in terms of a deliverable? You know you talked about a work plan. You talked about creativity and innovation, you talked about relationships, what does the deliverable look like when this 10 months is up?

Later during that same meeting, the City Manager said, “I do think it would be important for the council to give us some guidance and direction though, a little bit more specifically about what you expect us to do. And look if you want us to look at structures or bring something back we would need some direction on that. Honestly, this is a very sensitive subject to a lot of different folks, and I think our staff would appreciate guidance from the council as a body about what particular steps you might like to take. I don’t want to have a situation where there’s an ambiguity or an uncertainty about what we’re expected to do or not do. So we’re happy to work on anything that you wish, it would just be helpful to get some direction.”

So there we have it; the “passing of the buck” and no leadership. The city-hired consultant asks for direction, the mayor asks for direction, and the city manager asks for direction. Nobody is leading or holding anyone accountable. Lots of wonderful sounding words get thrown around, but what is actually getting done? If you have time, click on this link and watch these exchanges.

Yesterday there was a City Council morning work session, with a Community Engagement presentation by Linda Jones. Mickey Fearn was there as well. After her presentation, Mr. Fearn asked the City Council, “And I believe I could probably stand some direction from the Council. I mean, I know that I’m hired as a consultant to come in and sort of put all of this together, but I’m also real curious about what you think that model might be, what you think that model might look like, how do we take what we had with CACs and make it more inclusive and just have it reach more people.” Once again, the city-hired consultant is asking for direction, but he doesn’t get it.

If the mayor and City Council are doing proactive community engagement, we residents need to know about it. Otherwise we can only assume not much is happening. We’ve been promised for months that there will be a website associated with Mr. Fearns contract. It’s always “a week away.” After five months there’s at least a link on the City’s website that takes you to this page.