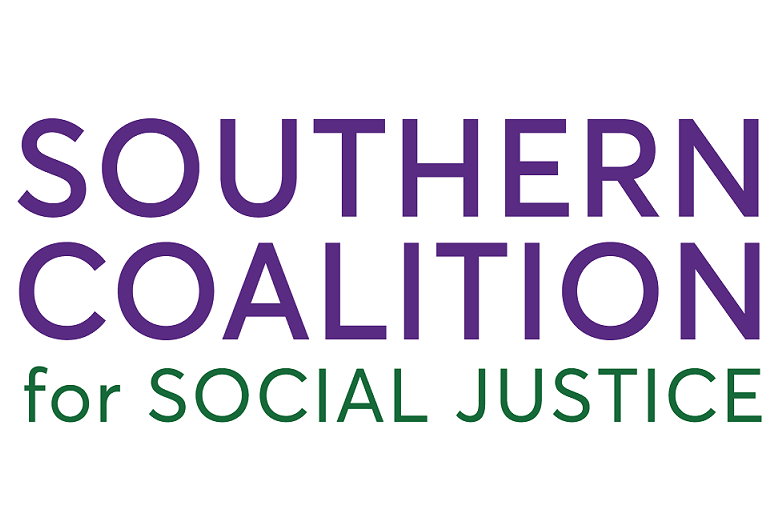 At the March 1 public hearing to review and approve new District Maps for Raleigh’s City Council, the City Attorney claimed Raleigh is not covered by Section 2 of the Voting Rights Act and City Staff claimed that the Advocacy Groups who reviewed the proposed maps uncovered “no significant flaws” in those maps as proposed.

Only Councilor David Cox questioned these assertions. The Mayor and other Councilors all accepted these as fact despite a dozen speakers telling them the opposite during the public hearing.

The Southern Coalition for Southern Justice is one of those advocacy groups. They took issue with these assertions and sent the following letter to the City Council. 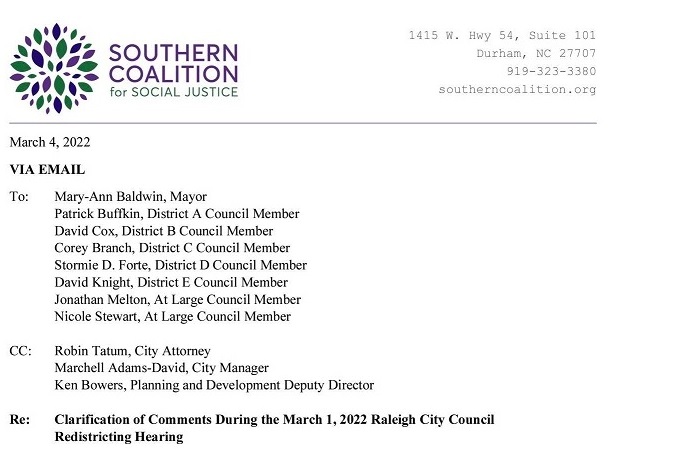 Dear Mayor Baldwin and members of the Raleigh City Council,

(2) correct mischaracterizations of SCSJ’s statements provided to the Study Group on Council Terms/Salaries and Voter Engagement/Participation in December 2021, and

(3) show support for a community-informed process before the March 31, 2022 deadline to adopt a revised map.

On March 1, 2022, the City Council held a public hearing to adopt new City Council districts following the 2020 decennial Census. Mr. Ken Bowers presented on the City Council’s redistricting process, which included an overview of the Study Group’s process of facilitating public input and provided the City Council with a list of pros and cons for each of the proposed maps (Scenarios 1, 2, and 3). Mr. Bowers stated that the Study Group invited several civic organizations, including SCSJ, to speak about the maps in December 2021, and he claimed these organizations reported “no significant flaws as the districts proposed.”

Following Mr. Bowers’ presentation to the City Council, Council Member Patrick Buffkin asked City Attorney Robin Tatum if Raleigh was covered by the VRA, Section 2. In response, City Attorney Tatum stated, “it is not.” Following this, Mr. Bowers, Mayor Mary-Ann Baldwin, and City Attorney Tatum specifically referenced SCSJ’s December presentation to the Study Group in order to argue the proposed maps would not cause a significant or substantial impact on the majority-minority districts. Ultimately, proposed map Scenario 2 was adopted by a 7-1 vote.

First, despite City Attorney Tatum’s statement to the City Council and members of the public, Raleigh is covered by Section 2 of the VRA. The City of Raleigh, Wake County, and other cities and counties across North Carolina must follow federal law, such as the VRA and the 14th Amendment, and state law when adjusting district lines to correct for population imbalances. 52. U.S.C. § 10301(a).2 Section 2 of the VRA makes it illegal for voting practices or procedures, like redistricting, to discriminate on the basis of race, color, or membership in certain language minority groups. In redistricting, Section 2 of the VRA prohibits denying voters of color an equal opportunity to participate in the political process. Johnson v. DeGrandy, 512 U.S. 997 (1994). Under Section 2 of the VRA, a “majority-minority” district is required when:

(1) the minority group is sufficiently large and geographically compact to constitute a majority in a single-member district;

(2) the minority group is politically cohesive; and

We ask the City Attorney to issue a statement correcting this error—there is no factual or legal basis to claim Raleigh is not covered by Section 2 of the VRA. Raleigh voters should not be misled about their fundamental right to vote, nor should City Council members, who must uphold and protect the right of voters.

Second, SCSJ’s statements from a presentation given to the Study Group on December 16, 2021 were mischaracterized and taken out of context. The Study Group asked SCSJ to share our thoughts about the proposed maps.³ Throughout the presentation, SCSJ prioritized centering local community knowledge, understanding, and input in the City’s redistricting process. Mr. Bowers and City Attorney Tatum referenced, without appropriate context, one bullet-point of SCSJ’s presentation, which communicated that “majority-minority districts, B and C, are maintained. There are some slight differences but will not have a substantial impact (reflection of changes & shifts in the population).” Given the other information conveyed in SCSJ’s presentation, their characterization of this information as saying “no substantial impact” on voters of color was incorrect and incomplete.

In fact, in SCSJ’s December 16 presentation, SCSJ explained and emphasized that slight variations within the maps, such as moving precincts, may substantially impact residents and that community knowledge is thus essential when examining the proposed maps. SCSJ emphasized the importance of community input at several points throughout the presentation and discussion with Study Group members. SCSJ also noted that our presentation did not include information about community interests and that it was absolutely necessary for the Study Group and other Raleigh decision-makers to consult with community members to fully understand the proposed maps’ impact. Finally, SCSJ advocated for creating an iterative or alternative map based on public feedback while also publishing all public comments during the redistricting process. To be clear, at no point did SCSJ express support for the proposed maps, as was suggested in the public hearing, or represent they would have “no substantial impact” on voters of color. On the contrary, we emphasized the impact that could result and the importance of identifying this by consulting with community members and incorporating their input.

It is disappointing the City Council did not understand the central takeaway from SCSJ’s presentation: Raleigh should listen to residents’ lived experiences and create a transparent redistricting process trusted by residents.

Although the City Council adopted a new map, we urge the Council Members to call a special meeting to amend or annul the March 1 Resolution and adopt a revised map by March 31, 2022, with additional opportunities for meaningful community input and public comment as part of the process. City of Raleigh Code of Ordinances Article II, Section 2.7 and Article C, Section 1-1022; Session Law 202156 (SB 722). Indeed, given the misstatements of both fact and law made at the public hearing, it is imperative that Council members correct the misinformation and allow another opportunity for public input.

As acknowledged during SCSJ’s presentation to the Study Group, the City of Raleigh’s actions, such as its interactive website and multiple opportunities to provide public feedback, are steps in achieving a transparent and inclusive redistricting process. But, these steps become hollow when community knowledge and input are neither considered nor reflected in the adopted map. And this is especially true when the public is provided false information regarding the applicable law and the views of social justice organizations.

We urge the City Council to correct the inaccuracies above, listen to Raleigh residents — because they are the experts about their communities and districts — and adopt a revised map this month.