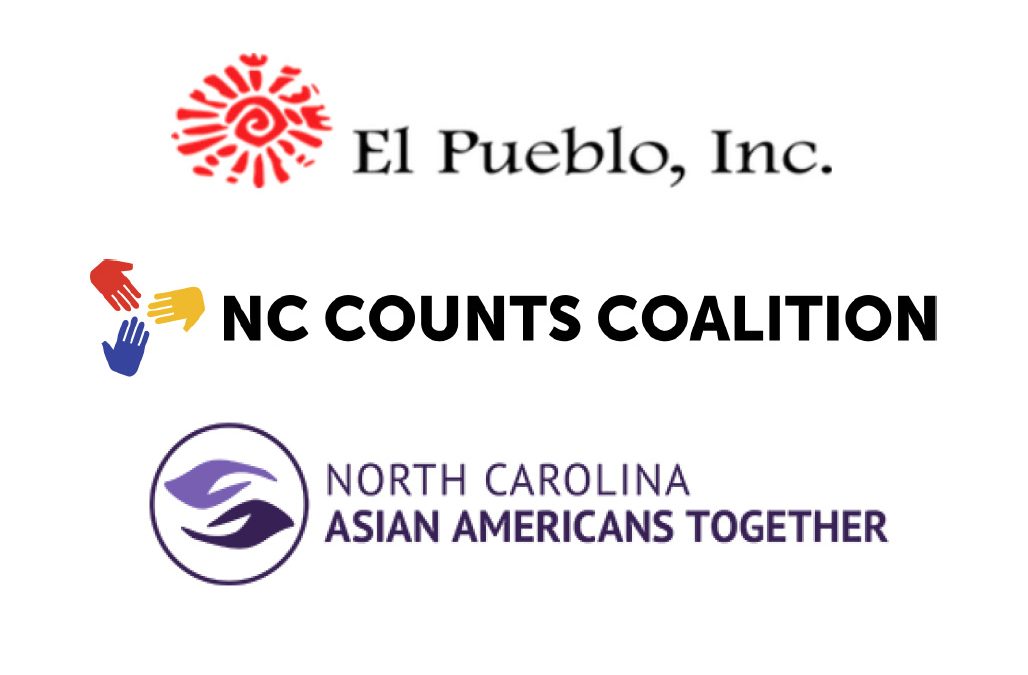 At the March 1 public hearing to review and approve new District Maps for Raleigh’s City Council, the City Attorney claimed Raleigh is not covered by Section 2 of the Voting Rights Act and City Staff claimed that the Advocacy Groups who reviewed the proposed maps uncovered “no significant flaws” in those maps as proposed.

Only Councilor David Cox questioned these assertions. The Mayor and other Councilors all accepted these as fact despite a dozen speakers telling them the opposite during the public hearing. 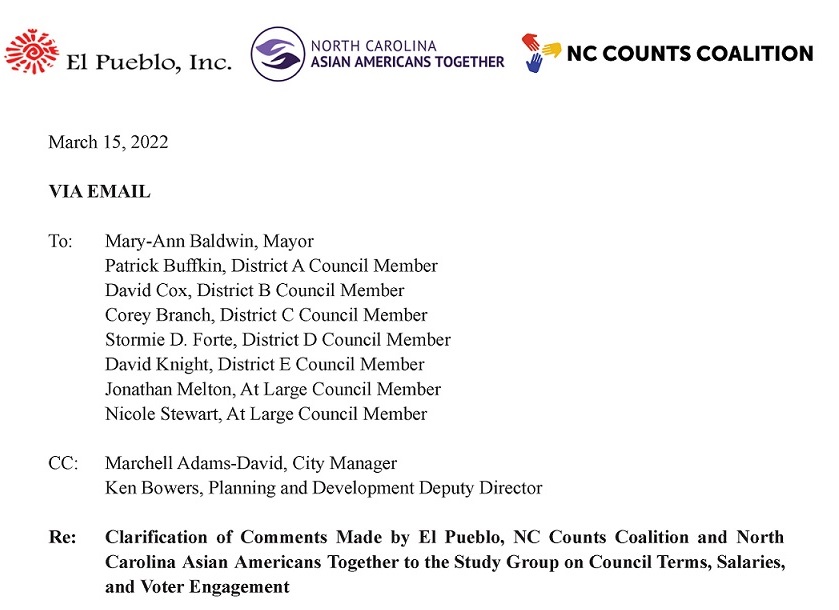 El Pueblo is a nonpartisan, nonprofit 501(c)(3) organization committed to building collective power through leadership development, organizing, and direct action so that the Latin American community and other marginalized communities control our own stories and destinies.

NCAAT is a nonpartisan, nonprofit organization committed to supporting equity and justice for all by fostering community among Asian Americans and allies in North Carolina through civic engagement, leadership development, grassroots mobilization, and political participation.

NC Counts is a nonpartisan, nonprofit 501(c)(3) organization committed to building a healthy, just, and equitable North Carolina through cross-sector partnerships that advance systemic solutions for communities facing systemic barriers. NC Counts facilitated and coordinated work between Coalition members and various grasstop and grassroots organizations throughout the redistricting process. Efforts included gathering key information, distributing details and updates on a State and local level, educating community members and stakeholders on redistricting, and helping the many organizations interested in redistricting to coordinate efforts and identify gaps in work that needed to be filled.

Our organizations previously provided comments to the Study Group for the purpose of detailing what communities need, and how current and proposed maps could impact many of the organizations and people we serve. While we celebrated some best practices that the City was implementing, such as creating a public website and an interactive tool for the redistricting options, we are concerned that some of our comments were misconstrued and taken out of context.

NC Counts’ comments to the Study Group also included criticism of the process and criteria. For example, the usage of incumbent residence information is an inherent conflict of interest for politicians that may  inappropriately favor incumbents, current elected officials, and may disfavor the changing demographics of the district in which a member resides. NC Counts stated that there should be no consideration of the resident location of incumbents.

Overall, the Study Group members did not seem receptive to our suggestions regarding thinking outside the box, analyzing inequities in the current districts, and ensuring that the voting power of communities of color are not diluted in this process. This lack of receptiveness highlights some comments made in the past by other organizations that have asked this work to include analysis of how communities of color would be impacted and asked that methods be implemented to limit the impact on those communities of color. And while City Staff did tell the Study Group that they could recommend that City Council direct City Staff to draw another option which would move majority white precincts to a majority white district to balance the populations instead of moving majority minority precincts from a majority minority district to a majority white district, the Study Group chose not to make that recommendation.

NCAAT specifically raised concerns about the move of the majority minority voting precinct located around the Green Road Community Center. While the numerical impact on the Asian American population may not have been as significant, it was shared that there is a specific Vietnamese community of interest in that area and questioned the fact that that particular voting precinct was affected in every scenario that was proposed. It was also suggested that the Study Group reach out directly to the Vietnamese community in that area similarly to the process that the City implemented around the planning for Capital Boulevard North.

Based upon the recommendation from multiple organizations, there was an additional listening session on redistricting held at the Green Road Community Center – in the area that was being shifted in every one of the proposed plans. Unfortunately, these listening sessions were not as welcoming and open as they needed to be. Facilitators did not support interaction with community members so that community members could feel open to express concern and ask questions. Further, because listening sessions on redistricting were paired with compensation, term lengths and other items, adequate time was not spent on a comprehensive redistricting discussion; the meeting structure undermined the importance of how critical fair maps are to our communities; and community members were not educated so that they could then engage in a meaningful conversation.

A fair and transparent redistricting process should include: being open and accessible to the community, involving community members who are most impacted by changes through education and disclosure of information, and drawing on community voices to determine changes that can be made to the process and to maps. An equitable and inclusive redistricting process goes further by incorporating information and data to adjust maps to community needs, and seeking to keep historically marginalized communities together to strengthen their voices so those communities can elect representatives of choice.

Unfortunately, not a single suggestion or comment from any community member or organization was incorporated into any proposed or approved map by the Study Group or the City Council. And more than that, it is problematic when community members are not given a full chance to voice their opinions in an open public hearing, or when comments are mischaracterized and taken out of context. These actions erode public trust and can dangerously create a sense of apathy in the public. We urge the City Council to incorporate public comments into the maps, to acknowledge the mischaracterization of comments, and to adopt revised maps that reflect the wishes and will of community members.