UpZoning 101: The Money and Politics of Growing Raleigh

Now that the Raleigh City Council has headed into its summer break and won’t be back until mid-August, we are taking this opportunity to look back at one of the highest profile zoning cases recently approved: Z-41-19 near Shelley Lake Park. We’ll discuss lessons learned, especially ones that can be applied to future zoning cases.  We’ll also look at opportunities for Raleigh residents to become more engaged with their elected representatives and to have a more productive dialogue about balancing legitimate development interests with the equally legitimate neighborhood and community interests. Our goal is to come up with a more predictable, win-win rezoning process for all stakeholders.

Welcome to UpZoning 101 (below) and 102 (coming soon). These two blogs describe what Raleigh residents learned during the recent Shelley Lake upzoning (Z-41-19). UpZoning 101 describes the money politics of upzonings. UpZoning 102 describes what the neighbors learned about leveling the upzoning playing field.

Before we get started, here is an explanation of zoning and its variants: rezoning, upzoning and downzoning. Every parcel of land in Raleigh has a legal zoning classification that defines what and how much can be built on it. The rezoning process is required to change any parcel’s zoning. While it is possible to downzone a parcel, it almost never happens. For all practical purposes, the rezoning process is an upzoning process: It is a request to increase the development potential of a parcel, either to add more of the current use or add a more intense use, or both.  A typical upzoning might change the permitted use of a parcel (or an assemblage of parcels) from single family residential to multi-family or to a commercial use, or both. We focus here on upzonings because, unlike downzonings, upzonings increase impacts on city infrastructure, the environment and community character. 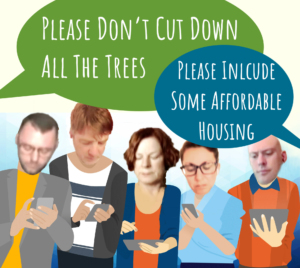 UpZonings Are Rubber Stamped, While Neighbors’ Concerns are Ignored.

UpZoning 101: This Council Puts Development Profits Ahead of Quality of Life

The Raleigh City Council recently approved an upzoning of land adjacent to Shelley Lake Park. The upzoning more than quadrupled the number of dwelling units permitted on the land, from 26 to 112, allowing buildings up to 4 stories. In approving upzoning Z-41-19, the Council did not support the community’s recommendations to reduce the impacts on the park’s recreational and natural beauty, the wildlife habitats or ecological systems, much less the nearby neighbors’ quality of life or property values.

Most Councilors were elected in 2019 with the help of hundreds of thousands of dollars in development industry campaign donations. It is simply not credible for them to insist they are not influenced by the cash they solicited, as they rubber stamp approvals. Click to see developer donations to Councilors

The new Councilors are naive about what they could and should do to foster productive negotiations between neighbors and developers. So they rely on Mayor Baldwin, a seasoned pro-development ally who works for one of the largest construction companies in the state. (See N&O reports of Baldwin’s conflicts here and here). Baldwin is proud of her ability to ramrod upzonings through as fast as possible. Raleigh’s 18 Citizen Advisory Councils (CACs) used to play the central role in negotiating upzoning compromises, but Baldwin’s new, pro-developer Council abolished the CACs early on, in a secret vote with no notice, no discussion and no public involvement. Indyweek said Council’s action “will always carry a stink that won’t wash off”.

Most Councilors hotly defend the idea that adding density improves housing affordability, an idea that conveniently aligns with the development industry’s ‘trickle down’ theory. They insist that if enough $750,000 units are built in Raleigh, the newly wealthy will move up and out of older homes, providing ample housing that is affordable to teachers, daycare workers and the rapidly rising number of long-time residents – many on fixed incomes – who are being priced out of Raleigh. This, of course, is a fantasy driven by developers who have no interest in building affordable housing for lower profit margins.

It’s been said that only two groups can create money. One is the US Treasury. The other is a local government when it grants an upzoning, which magically increases both the land value and the development profitability of a parcel. Past Councils have seen this grant as one half of an exchange in which the developer, in return for the upzoning, agrees to provide community benefits negotiated with the neighbors. Nowadays the idea of Council seeking a win-win that approves an upzoning with impact mitigations and community benefits is so, so out of date. The thousands of signatures obtained on multiple petitions in the Shelley Lake upzoning were ignored by this council. With no attempt to compromise or find another solution, the council voted for density and developer profits over the quality of life for the people of Raleigh.

This Mayor and Council made many progressive campaign promises about promoting affordable housing and protecting our natural environment. But when Shelley Lake neighbors asked Council to live up to their promises and work with the developer to include a few affordable units and to use Raleigh’s innovative options for reducing stormwater runoff impacts on this steep site, the answer was — no answer. Not a peep. David Cox was the only Councilor who took the neighbors’ concerns seriously and opposed the case without mitigations.

This Council has been dug in from day one behind Baldwin’s marching orders: (1) more growth is always better and (2) developer profits are always more important than protecting the environment or improving our community’s quality of life.

As a preview of UpZoning 102, here are the words of a Shelley Lake neighbor who educated herself about the Z-41-19 process and the players:

“So what are concerned Raleighites to do? How do we access truthful, vetted information that enables us to make well informed decisions on land use management and rezoning topics that are important to our communities and city?  How do we make our recommendation known to city leadership and maintain equal partnership in a supposed democratic process?”