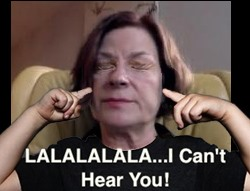 Sometimes it’s the small things that speak volumes about what a politician really cares about. Or does NOT care about.

One example: Mary-Ann Baldwin’s proposal regarding public comments, which she made at the November 4 meeting of City Council.   [Her statement begins at the 2:14:07 mark of the meeting.]

If more people sign up to speak to City Council, Baldwin suggested, that should result in all of them getting less time.

No, really. That’s what she said.

Listening to the public is not what MAB is here for.

The standard time limit is 3 minutes each for everyone who speaks during the portion of a Council meeting devoted to hearing from the public.

Baldwin’s plan: If more than 15 people sign up to speak, cut their time to 2 minutes each.

A 1-minute time limit when the public is clamoring to be heard?

In one syllable, UGH.

Here’s a better plan: Council could have a public listening session once or twice a month and let the people have their say.

During this pandemic, almost every other avenue for public comment to City Council has been cut off. The ONLY one that remains viable is the right of citizens to sign up and speak to their Council for 3 minutes on any subject they want to raise.

Kudos to Councillor David Cox, who was the lone member to speak against Baldwin’s plan.

“I think it’s important to hear people, and I’m not in favor of [shortening] the time limit,” Cox said.

Baldwin, however, has never cared much for listening to the public. She does listen to a select few who are mainly her well-heeled campaign donors. But otherwise, she’s much too busy to make time for regular folk.

Famously, she once proposed that City Council members — including the mayor — be barred from attending Citizen Advisory Council (CAC) meetings, which were designed to foster discussion between city officials and the interested public.

(When she was a Council member, she rarely attended CACs, though of course she was a regular at Chamber of Commerce meetings.)

Though she failed in that effort, Baldwin made it a top priority once elected mayor to sever the city’s ties to the CACs completely in an effort to kill them. Sadly for her, many of the CACs are still going strong, albeit hampered by the pandemic.

Baldwin’s Council has all but eliminated Council committee meetings as a forum for public input on city issues. In the olden days, anyone could show up at a committee meeting, raise their hand and be heard on whatever the topic was. Council members actually welcomed public input.

Under Baldwin, and amidst the pandemic, the committees don’t meet very often. And when they do, the sessions are virtual, brief, and if the public wants to speak, they have to sign up in advance and hope that the chair will call on them — which often does not happen.

As for the legally required public hearings on, say, rezoning cases or changes to the zoning ordinance, they are little more than checking a box. Proponents, including the applicant, get 8 minutes total. Opponents, regardless how many there are, also get 8 minutes total. That’s right, TOTAL.

Mayor Baldwin periodically remembers to say that citizen engagement is very important to this Council. But those words ring hollow given her actions, and the way every Council member except David Cox goes along with her.