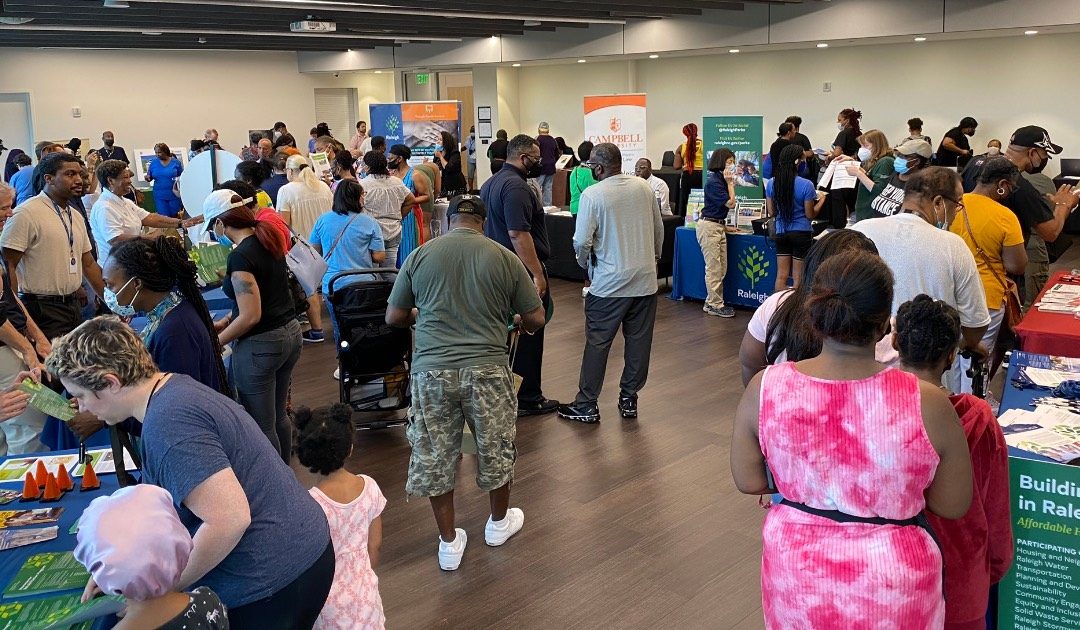 On August 5 the City of Raleigh’s Housing and Neighborhoods Department held an Affordable Housing Open House, ostensibly to provide the public with information and increased access to affordable housing and other needed services offered by the city and a dozen other community organizations.

The effort and energy put into this highly-publicized event that attracted over 1000 people and the subsequent presentation to City Council were impressive. However, I understand that many people (including single mothers) were disappointed in the event because they had high expectations for housing solutions that they need NOW.  So, this appears to have been no more than a manipulative ploy to generate attendance numbers for positive press in advance of the election— without producing any real results.

I attended the event to educate myself.  I have a strong interest and belief in affordable housing for everyone–especially for those who need it most.

I stopped by Raleigh’s Housing and Neighborhood Department’s station and briefly talked with a staff member about plans for affordable housing for lower income residents. A display board presented data on the Ten-Year Affordable Housing Plan from 2016 to 2026. The plan calls for 5,700 new and preserved housing units to be provided for those making below a specified income level.  Since 2016, 2,872 units have been completed.

However, I know, and so do City Council and Staff know, that 4,000 to 5,000 affordable units have been and continue to be lost every year for the past several years.  So how does a goal of 5,700 units over 10 years rectify that loss?

Those once affordable units are being torn down and replaced by luxury apartments, forcing middle class and below residents out of their homes and neighborhoods and effecting class and race gentrification.  I have been watching this happening all over the city for a long time–whole apartment complexes, blocks of low-income rental property in Southeast Raleigh, cottages, duplexes, etc.  When I asked the city staff member about this, I was informed that the city cannot legally dictate what citizens can do with their private property.  I know that there are other options like maybe negotiating, incentives, denying rezoning requests, etc.

My take is that people showed up because it was highly advertised and because it offered the resources that they desperately need now. And what did it give them beyond a hope and a promise while the reality is loss and displacement for most of them? If it weren’t for our community agencies and a few small builders partnering with the city, Raleigh’s low-income residents would not have a prayer.

At the August 16 City Council meeting Councilor David Cox stated that homelessness has doubled in the past year and that the Green Chair Project has served as many people so far this year as they did all of last year.

A friend of mine, who is part of the African American community in Southeast Raleigh, also attended the Affordable Housing Open House.  She told me that her take on the event was “performative.”

Right—and just in time to look good for the elections in November.