Mary Black-Branch, Dist A Candidate, in her own words 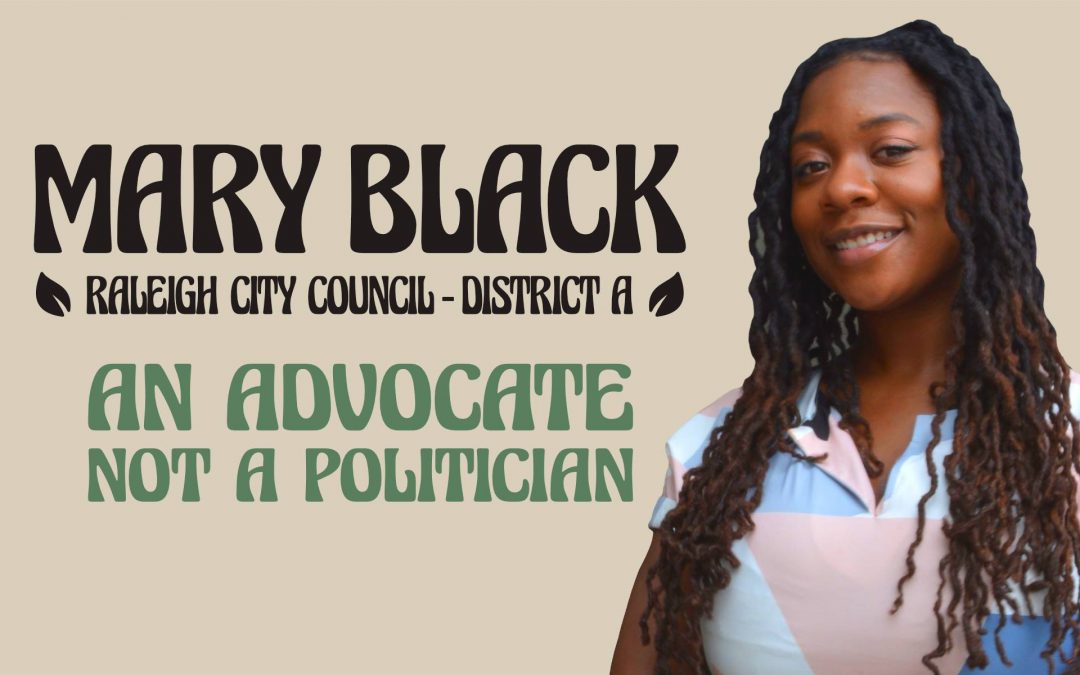 Mary Black-Branch is Livable Raleigh’s endorsed candidate for City Council in District A. She recently answered a question about herself on Twitter and we are reposting her answer here.

Question: What got you into activism?

This is actually a great question and the answer is grounded in the history of Raleigh!

Allow me to tell you a story?

For those that don’t know, Raleigh is my chosen home. I moved here in 2005 to attend school at the Exploris School. And fell in love with this city. The trees. The people. The museums. The culture. The never ending festivals. I knew Raleigh was a place I wanted to stay forever.

In 8th grade, I was a part of a group of students that developed an urban field guide for the Walnut Creek Wetlands—that is just minutes from the heart of downtown. Every Friday, we would grab our galoshes and hit the wetlands to document any sign of animals we could see.

I thought I would hate the experience, but ended up being grounded in the time spent in nature as well as the deep legacy of environmental injustice for the historic African American communities (Rochester Heights and Biltmore Hills) that the wetlands is located in.

Rochester Heights was the first planned subdivision for black families in Raleigh. It was built on a flood plain. When the wetlands would fill with water, as wetlands tend to do, houses in the neighborhood would flood.

For more than five decades, the wetlands was a neglected swath of undeveloped land, that the city even used as a dumping ground for sewage into the creek. But the community fought back. As an eighth grader I attended a board meeting with the Partners for Environmental Justice (PEJ).

The PEJ, led by Dr. Norman Camp, was the chief community group that was spearheading the fight for environmental protection and flood mitigation for this community. They were integral in achieving the parks bonds that allowed for the development of the Wetlands Center.

The Dr Norman And Betty Camp Education Center has been open since 2009 and I implore anyone who has not been to visit this truly magical little slice of Raleigh to go ASAP. Walnut Creek Wetland Park.

As an 8th grader, I thought I was just learning about nature and the importance of visiting green spaces. But really, I learned what community led solutions can look like when communities have the capacity and ability to vision for their future.

I learned that environmental injustice is an existential issue that is associated with so many other injustices/realities and it will require self determined people power to resolve. Can’t talk about housing justice without environmental justice.

I decided then and there to become an environmentalist. Specifically an environmental activist that is motivated to address the intersections of climate, race, environment, and equity. After college I actually came back and spent sometime on the PEJ board of directors. Full circle!

That was long but thanks for reading!

Thank you Mary, for responding so thoughfully to a voter’s question!