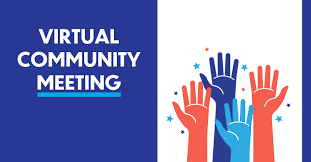 North Carolina Attorney General Josh Stein was to make comments at the beginning of the meeting, but had a conflict, so he sent in a video. His presentation was only a few minutes long, and comments were mostly directed toward Hate Crimes and Anti-Semitism. Josh Stein talked about how he was working hard to protect citizens from Anti-Semitism and all types of Hate Crimes.

Councilor Buffkin then introduced Police Chief Estella Patterson. Chief Patterson referred to herself and wrote her name ID on the screen as Stella Patterson. Chief Patterson announced that she had brought along Tim Tomczak, Police Leader of Raleigh’s North Police District, and also Detective James Hampton of the Raleigh’s North Police District. She also noted that FBI Agents Steven Jessup and James Aye were in attendance.

Chief Patterson then showed a video she had prepared where she stated a number of the goals she was seeking to accomplish as Raleigh’s Police Chief. She stated that Community Engagement was one of the main things that was needed to build trust with the citizens.

She told a story of how when she was first announced as the Police Chief of Raleigh that she was approached by the head of the Auto Zone Stores, and given 100 $25 Gift Cards for police officers to give to drivers that were stopped with vehicle maintenance problems such as brake lights being out. Auto Zone wanted to promote that it was better for the Police to help drivers correct automobile safety violations, rather than give them a ticket, upset them, and cost them money. Chief Patterson expressed her appreciation for this action by Auto Zone.

Chief Patterson went on to tell about units that she has created in the Raleigh Police Department:  The ICARE Team to connect and make bridges with Citizens, the ACCORN Unit of 8 members of a mental health team who are Certified Specialists, Youth Centered Activities being provided, Crucial Conversations, and LGBTQ+ Liason. Chief Patterson talked about Fighting Crime, Hiring the Best Police Officers, and Retaining the Best Police Officers. She also said Raleigh has many openings for additional Police Officers that must be at least 21 years old and that are of great character. She also spoke of an internal Police Action Committee within the Police Department that discusses all and any issues of concern to the Police Officers and Department Employees. And she mentioned that Wellness Issues were important to the Officers and the Department.

Chief Patterson went on to recognize FBI Agent Steven Jessup who is over Civil Rights Programs and Hate Crimes, and FBI Agent James Aye who is assigned to assist with City of Raleigh Hate Crimes.

About 3 citizens asked general questions or made comments of appreciation. One man complained about how the Raleigh Police had allowed some white supremacists to cover their license plates during protests and while leaving the area to protect themselves and not be identified.

Chief Patterson then also recognized Rabbi Eric Solomon and Mark Golhaber, and allowed them to speak to the audience. They spoke highly of Chief Patterson and of the Raleigh Police Department with regard to their cooperation with issues and protection of the Jewish Community.

It is noted that some citizens desired to make comments in Chat, but Councilor Buffkin stated that Citizens could only make verbal comments to the Audience, and that Chat Comments were not being allowed. This put people at a disadvantage if they did not have audio capabilities on the devices they were using to join the meeting.

Ms. Hinton told of new Community Engagement initiatives such as the Engagement Vehicle, a bus with “Raleigh – City Hall on the Go” written on the side. Other items to be addressed included defining terms, standard conditions, training, community volunteers, training at Community Buildings, and the Rezoning 101 – Planning Academy.

There was then time for Audience Comments and Questions, and again it was stated that comments had to be verbal, and that Chat Comments were not being allowed.

Ms. Hinton spoke of trying to deal with the friction and differing opinions of citizens and council members, and stating that it was very difficult to control everything.

One attendee mentioned the friction between citizens and developers around zonings, and said “City Council was not doing good toward citizens.”

Another attendee did not give verbal comments, but gave a lot of negative reaction Emojis to comments made in support of the City Council and of charges made against the CACs. She also gave positive Emojis with regard to positive comments made in favor of the service of the CACs.

Others gave similar positive Emojis for the CACs and gave negative Emojis to some comments made by Councilor Buffkin, and to comments against the CACs,

It was an interesting meeting. There were favorable comments made by attendees with regard to Stella Patterson, Tiesha Hinton, and the law enforcement officials in attendance.

As many as 71 different individuals were on virtually at times during the meeting, about 10-15 of whom were officials and staff. The meeting was recorded, but it’s not clear if or when the recording will be made available. That has been an issue with past District A meetings: