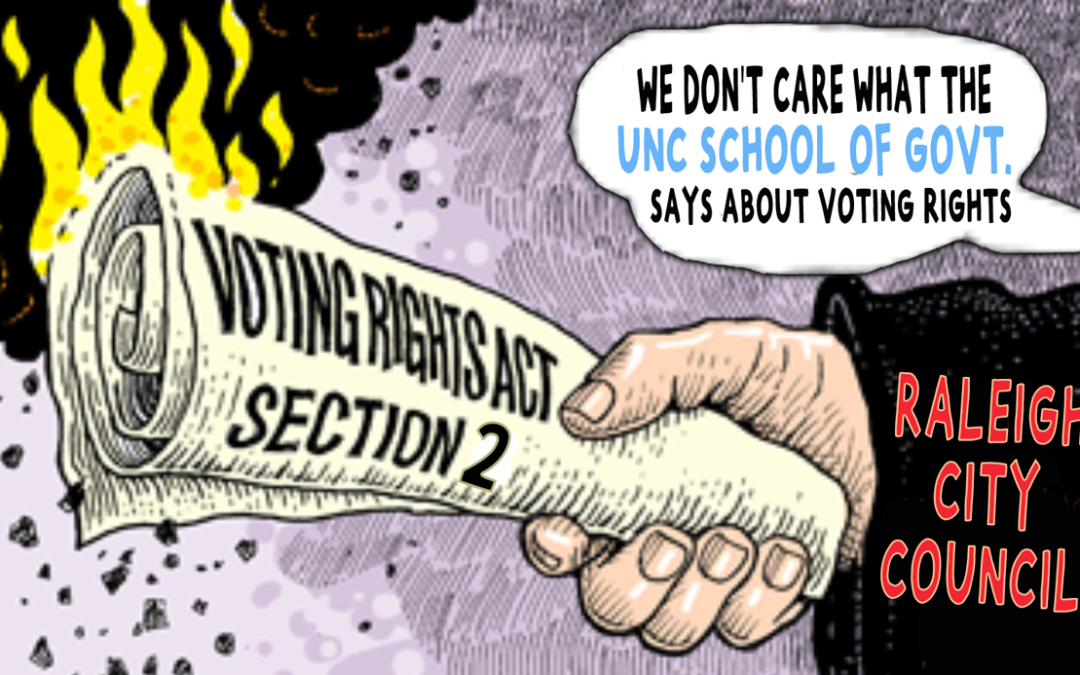 City Councilors believe they can violate the voting rights of minority communities in Raleigh without consequence.

On March 1, at a Public Hearing to comment on a redistricting proposal, Raleigh City Councilors heard testimony from a dozen citizens, many of whom are members of impacted minority communities and advocacy groups. The speakers described the dilution of the votes of minority populations in all three options of redistricting maps presented to council. They described the flaws in the process of creating the maps without benefit of public input and then the flaws in the process of collecting data from the public AFTER the maps were created.

All three map options created by city staff moved at least one majority-minority precinct from a majority-minority district into a majority-white district. This dilutes the voting power of those moved in addition to lowering the minority population percentage of the district they were moved from. Staff offered no option that didn’t violate the voting rights of minority communities even though they were asked to do so by voting rights advocacy groups and members of the community.

Every member of City Council, except Councilor Cox, decided that as long as the City Attorney is willing to say that Raleigh isn’t covered by the Voting Rights Act and is not legally required to protect minority communities, there is no need to be concerned.

It’s bad enough that all these councilors are willing to disregard the voting rights of minority communities simply because they think they can get away with it legally.

But, are they even right in their assessment of the Voting Rights Act? Is Raleigh really exempt from the law?

Livable Raleigh asked the UNC School of Government if Section 2 of the Voting Rights Act of 1965 applies to Raleigh and here is the response we received:

Here is some additional research explaining Section 2 of the Voting Rights Act and how it does apply to Raleigh.

“Another federal requirement comes from Section 2 of the Voting Rights Act (VRA), as amended, which prohibits states or political subdivisions from imposing any voting qualification, practice, or procedure that results in denial or abridgement of the right to vote based on race, color, or membership in a language minority. Under the VRA, states cannot draw district maps that have the effect of reducing, or diluting, minority voting strength.”

From National Conference of State Legislatures:

“In addition to population equality, Section 2 of the Voting Rights Act of 1965 prohibits plans that intentionally or inadvertently discriminate on the basis of race, which could dilute the minority vote.”

Read what the Southern Coalition for Social Justice had to say: City Council misstates law and mischaracterizes public input