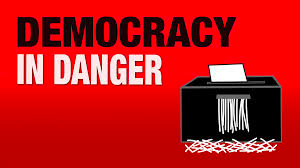 Jane Porter, Editor-In-Chief of INDYWeek, writes a daily email newsletter, INDY Daily. The March 4, 2022 edition takes on Raleigh’s City Council for their most recent undemocratic decision. She asks that we share the newsletter with our friends. So, we reprint it here.

Raleigh’s City Council has made a number of undemocratic decisions with limited input from the city’s residents in the past couple of years: there was eliminating the CACs without public notice two years ago; there was moving the city’s municipal elections date in closed session, giving all the council members an additional year in office; and this week, there was a redistricting decision that moves some 55,000 residents living in District B—who are mostly (60 percent) minority, Black, or Hispanic— into the much whiter District A, a move that’s sure to dilute their vote and one that voting residents and groups that represent them emphatically opposed in a public hearing at the council’s meeting on Tuesday.

We will have a longer report on the council’s redistricting decision soon, but here’s a quick summary of what happened: following the US census that’s taken at the beginning of each new decade, the council (and all other governing bodies) has to reapportion its districts to make sure they’re all roughly equal in population, within 5 percent as compared to one another according to state law. The census found that District A has much fewer people than the other districts, while District B had substantially more people. So the council directed city staff to come up with some options for the council to reapportion its districts, and they did, and they passed along those options to a study group that was supposed to use public input to make a recommendation to the council.

Long story short, the “best” option determined was the one that moves 55,000 people to District A from District B, including residents from the Brentwood and Green Road neighborhoods in North Raleigh, which are majority Black and Hispanic/Latino, to majority-white District A. *

Residents and their advocates railed against the move at the council’s public hearing this week, with charges of splitting up communities and the study group ignoring the wishes of residents and groups who tried to give input on the new districts.

Council members, too, acknowledged that the redistricting breaks up minority communities, but seemed not to care.

District A Council member Patrick Buffkin, who is running for the state Senate, asked the city attorney if the city has to comply with Section 2 of the federal Voting Rights Act with redistricting. The attorney said the city does not have to—and that was that.

The council passed the redistricting plan 6 to 1, with only Council member David Cox, who will lose constituents in District B, voting against the proposal. **

We can speculate as to why the council would go along with a redistricting proposal that moves thousands of minority residents into a new district against their wishes, in a decision that will surely dilute their voting power.

To me, at best, it represents an inability to think independently of the study group’s recommendation—there were plenty of other options on the table, proposed by the staff, advocacy groups, and residents themselves that wouldn’t slice up a minority-majority city council district.

At worst, it’s an affront to these residents who want representation on the city council, a repudiation of all of the city’s claimed commitments to racial equity, and a farce if the council wants its claims that it is working toward better citizen engagement following the dissolution of the CACs to be taken seriously.

Raleigh’s city council members are all Democrats. *** When Republicans do things like this, people get up in arms. Redistricting, and particularly redistricting on the most local level, also just isn’t that interesting to a lot of people, I suppose. The Brentwood and Green Road residents are outraged and upset to be cut out of their districts. But we won’t see any lawsuits making their way up to the state Supreme Court over this—just a bunch of residents now in a district that will likely be represented by a white person beholden to special interests rather than to theirs.

* The option selected does move 55,000 people from their current district to another. Not all of them are being move from District B to District A.

The chart below shows the three scenarios developed by city staff and the racial makeup of the precincts proposed to be moved. A fourth, titled A BETTER OPTION, was created by the Livable Raleigh Editorial Team and shows how the city’s population could be re-balanced by moving only two majority white precincts into a majority white district. No minority precincts needed to be moved at all.