Councilor Knight on CACs, They are Inappropriate! 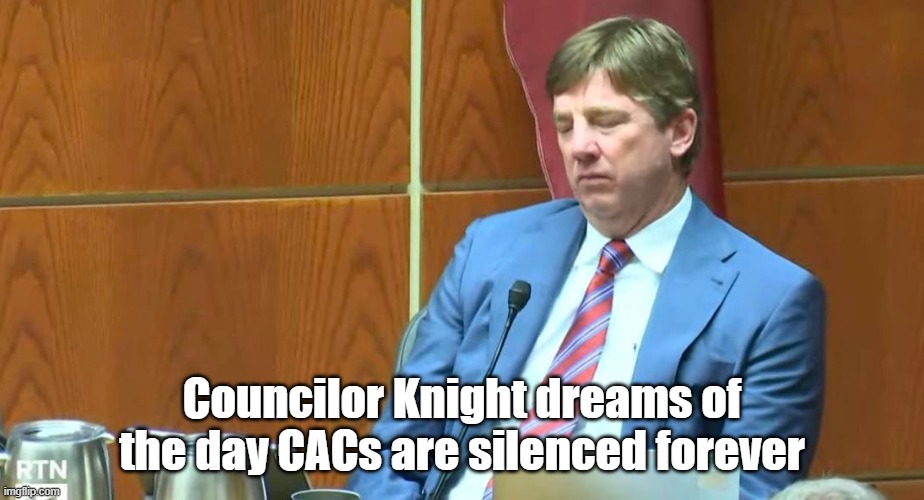 At the Sept 20 Work Session, Councilors Knight and Melton mischaracterized the work of the CACs.

Knight said the CACs, by continuing to call themselves CACs, were misleading the public. They were self-elected, self-selected, exclusive and inappropriate.

He said the one vital thing they were doing was voting on other people’s property rights without being elected to do so.

The only one misleading the public is Knight.

CACs were intentionally designed by the city to be self-elected instead of appointed by the Council.

CACs were assigned the responsibility of hearing and voting on rezoning cases by the City. It was a non-binding vote intended to convey the thoughts of the neighborhood.

It’s disturbing that a City Councilor can be so ill-informed about one of his main job responsibilities.

Melton responded to an inaccurate presentation by a Planning and Development staff member who claimed that Neighborhood Zoning Meetings had increased dramatically in 2022 over 2019 without including the CAC Zoning meetings in the counts.

Melton praised the report while noting that he had made the current two neighborhood meetings required when the one previous meeting had not been required.

While this is technically true, it is not honest. In the past, rezoning cases had one neighborhood meeting and a minimum of two CAC meetings. So, at least 3 meetings per case compared to two now.

While they weren’t codified in law, they were codified in practice. So much so that the Planning Commission would not hear a case that came before them without the CAC report.

Melton also noted that people don’t trust the neighborhood meetings because they are run by the developers and he wants to fix that. Maybe he should fix the inaccuracies in his own statements so that people could trust what he says.

Watch this clip from the Council’s Sept 20, 2022 Work Session to see what Knight says about CACs for yourself.

Watch this video, produced by the City of Raleigh, and decide for yourself if Councilor Knight’s description of CACs is accurate.