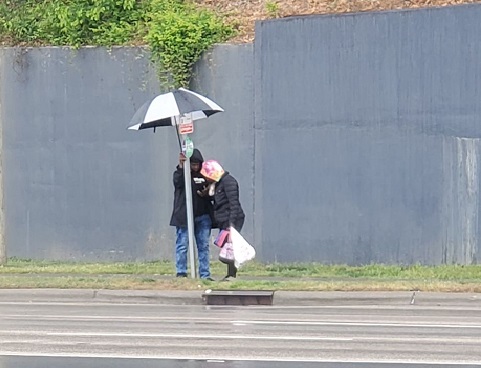 During the Public Comment session of the City Council meeting on April 22, both Susan Maruyama and Chantelle Miles addressed the recent N&O article concerning the lack of benches at 70% of Raleigh bus stops.  They asked the council to show compassion to people like Ms. Lenora Southerland who are physically challenged and depend on bus transportation to get around.  Ms. Maruyama and Ms. Miles challenged them to take immediate action to accelerate the installation of benches at every bus stop to help those most in need.

David Eatman, Transportation and Transit staff, reported on the reasons why shelters could not be installed immediately due to the constraints of ADA regulations and policy.  Many of the bus stops do not currently meet the standards required for installation including Ms. Southerland’s bus stop.  He reported that they were moving forward as quickly as possible, however, bus shelters normally take more than six months to complete.  Of the 1400 bus stops in the service area, 315 qualify for shelters under current council policy based on the number of ten boardings per day.   Of these, approximately 235 have been completed and the rest are underway in design or right of way acquisition.  Nothing was mentioned about installing benches alone at any stops or if that had ever been addressed.

This issue invoked a rare discussion during a council public comment session and four council members voiced their concerns and expressed strong support for finding solutions to the problem—Corey Branch, David Cox, Stormy Forte and Jonathon Melton.  Mayor Baldwin agreed with the need to make more progress to better serve the people living in the community.

Those involved in the discussion agreed that there is a need to “think out of the box” and find creative ways to expeditiously address the issue.  David Eatman offered to look into the “Exception Policy for Senior Citizens” that will allow installation of benches without meeting all of the ADA requirements. He and the Raleigh Transportation and Transit staff will work with the Raleigh Housing Authority to find solutions.  According to Mayor Baldwin, the Raleigh Housing Authority Board is aware of the issue and has asked Wayne Felton, Executive Director, to look at this bus stop as well as other bus stops. Jonathon Melton said that he will meet with city staff next week to find creative ways to find interim solutions to full shelter build outs.

There has been a huge public outcry about the lack of a place to sit at bus stops, especially for those with physical limitations.   It appears that the Mayor and City Council are listening.  Let’s stay tuned …