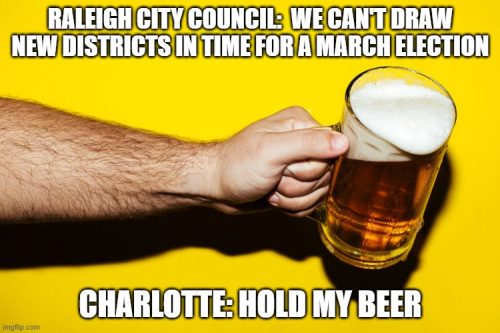 “Charlotte isn’t delaying their election. They’re having a March election. Greensboro too. It was just a con job to say that they had to postpone the election in the manner they did.”

Does Raleigh’s electorate present unique challenges that Charlotte’s does not?

When presented with the fact that the federal census data would be delayed in being given to state and local governments this year, it became apparent that any municipality in North Carolina that relies on districts for elections would have to delay their fall 2021 elections in order to redraw their electoral districts.

With the exception of Raleigh, every municipality in North Carolina that was effected by this, moved their fall 2021 elections to March of 2022 to coincide with the spring primaries. This also meant the elections would be held AS SOON AS POSSIBLE to allow the people to have their voices heard.

But, Raleigh made the claim that they could NOT redraw the City Council districts in time for a March 2022 election. Instead, Mayor Mary-Ann Baldwin asked the North Carolina legislature to move Raleigh’s election 8 additional months to November 2022. She did this behind closed doors, with no public notice, no public input, no public debate and no public vote.

An added benefit for mayor Baldwin and the other incumbent councilors is that they also had the legislature change the form of the City Council election. Instead of a “majority” election which requires the winner to get more than 50% of the vote, the form was changed to a “plurality” election. This means that no matter what percentage is attained, the candidate with the highest total wins whether they have more than 50% of the vote or not and there will NOT be a runoff.

Had the election been moved to March 2022, like all other municipalities, the election would have required a runoff if no candidate received over 50% of the vote in the first round.

Despite Raleigh’s claim that they could not redraw their districts in time for a March 2022 election, Charlotte just approved their redrawn districts this week. Charlotte DID NOT have access to the census data earlier than Raleigh. It is obvious that Raleigh could have redrawn their districts and held their City Council election in March 2022, just like Charlotte. Of course, that would have required Mayor Baldwin and the other incumbent councilors to get over 50% of the votes to win re-election. Instead Raleigh will hold a “plurality” election in November 2022. Plurality elections are widely considered to favor incumbents. You may recall that Mayor Baldwin only received 38% of the vote in 2019 when she was elected mayor. She is not interested in having to deal with the possibility of a runoff. This explains why she asked the legislature to move Raleigh’s election to November 2022 and eliminated the possibility of a runoff for her re-election.

Read how Charlotte was able to do what Raleigh’s Mayor Mary-Ann Baldwin said was impossible.

What to know about Charlotte City Council redistricting