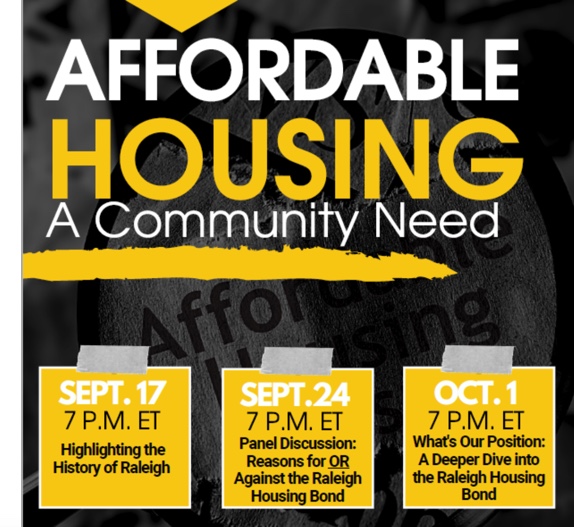 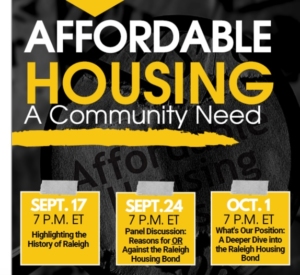 A heads up if you’re looking for information about the $80 million Affordable Housing Bond Question on this year’s ballot:

Tomorrow night — that’s Thursday, September 24, 7 pm — the Wake County Housing Justice Coalition is hosting a Zoom’d debate on the pros and cons of the bond program. In short: Should you vote for it, despite its shortcomings? Or against it, because it falls too far short?

The Zoom is free, but registration is needed in order to get the Zoom link via email.

The debate is the second in a series of three WCHJC programs related to the bond issue. If you missed the first one, you can watch it now by clicking on THIS OTHER LINK.

Be sure to turn on the volume at the lower right hand edge of the screen.

With the volume up, you’ll hear Carmen Cauthen, the longtime civic leader,  discussing “The History of Housing in Raleigh” from a black perspective. Cauthen is a terrific story-teller, and her narrative puts the current problems of affordable housing in a context that goes back to 1) the founding of Raleigh; 2) Raleigh’s plantations and slavery; 3) the Emancipation of African-Americans following the Civil War; 4) Jim Crow and segregated housing; and 5) today’s issue of the White Gentrification of Black Neighborhoods.

Cauthen draws on her own family’s history to weave a story very much worth listening to. Frankly, if you live in Raleigh and don’t know this history, this is a great start on learning it. If you think you know this history — and I did know some of it — I believe you’ll come away with new information and, hopefully, a desire to dig down further.

Here are a few takeaways from her talk:

The crisis of affordable housing is national, and Raleigh is better off in many respects than bigger cities like New York, Boston and San Francisco. We still have undeveloped land on the outskirts of our city and in the low-lying areas. Tract houses here cost $300,000 that, in San Francisco, might cost $3 million.

Still, downtown Raleigh is booming, with no room for low-income folks. Since the end of the 2008 Great Recession, downtown has pushed relentlessly into the low-income neighborhoods of East, Southeast and Southwest Raleigh that used to be outside of the city limits but are now within easy driving or bicycling distance of the Capitol.

These communities of African-American owners and tenants, historically disadvantaged by slavery and Jim Crow, don’t have enough money to withstand the pressure of wealthier white buyers. And even if they’re determined to hold on, the rising prices all around are pushing up property taxes, forcing their hands.

That’s the background of the great Affordable Housing Debate. Will the $80 million alleviate the problems, or make them worse?