What’s in a Text Change? The Case of TC-4-20, an Effort to Weaken Residential Infill Development Standards. (You expected something else from this Council?) 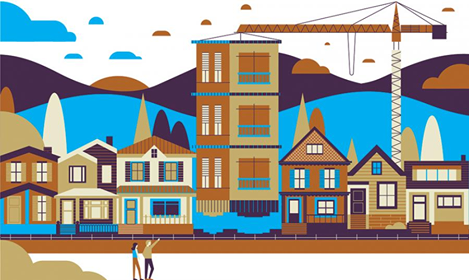 The City is on the verge of changing our rules about residential infill, and not in a good way. That’s our short take on TC-4-20, a “Text Change” that would amend and loosen the city’s zoning code – the so-called Unified Development Ordinance, or UDO.

So, by way of introduction —

1 The first thing to know about TCs is that they are legalese, and they often describe in words things that are best understood if shown in pictures. Pictures can and should be included with the text, but Raleigh doesn’t always do that.

2 Because text changes can be so confusing to anyone who isn’t a development lawyer, the City did recently unveil a Text Change Engagement Portal, Public Input Portal, to give folks an opportunity to learn more and to provide input. This is a positive step in the public engagement process, but would be more helpful if the time period for commenting were increased and if there was better publicity about this tool.Before the current Council severed ties with the Citizens Advisory Councils, TCs were commonly explained by planning staff at CAC meetings. That method of public engagement needs to be restored.

3 Text changes are amendments to the City Code. Anyone can request a text change and even propose what it should say. If City Council approves – a preliminary approval — the process is that the Manager and staff take charge of producing a TC draft, which is then submitted to City Council for final adoption. A public hearing is required prior to final Council action.

4 If the TC draft relates to development, it is reviewed first by the Planning Commission before Council takes it up.

5 Ordinary Raleigh residents can find themselves at a disadvantage when a text change is proposed, as the language is often very technical. This doesn’t constitute a problem for developers and land use attorneys because they already speak the language.

So now, let’s look at TC-4-20, which according to the City website “Amends the Part 10 Raleigh Unified Development Ordinance (UDO) to modify how average grade and building height are determined, the applicability of residential infill compatibility and setback standards and how side wall plane height and setbacks are determined.”

That’s quite a mouthful, but, if passed, this text change would continue to erode what residents fought very hard for when the UDO was first adopted – residential infill compatibility.

As stated in the UDO,

“The intent of the residential infill compatibility standards is to accommodate and encourage compatible development in existing neighborhoods, while reinforcing the established character of the neighborhood and mitigating adverse impacts on adjacent homes.”

That means that when a house in an existing neighborhood is torn down or renovated, the replacement must be compatible with surrounding homes.

But TC-4-20 would allow many more exceptions to residential infill compatibility standards. It would also grant additional height allowances to infill projects.

TC-4-20 is scheduled to be discussed at the Planning Commission’s Text Change Committee meeting on August 18 at 4 p.m.

If you want to learn more, plan to watch these meetings and sign up to ask questions or share your thoughts.

You can also email