Voting begins. But, not for Raleigh City Council 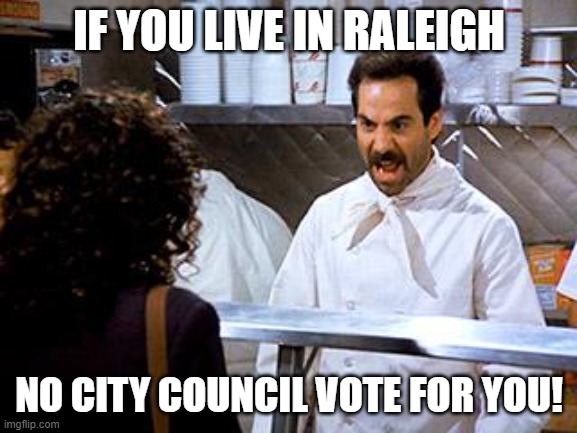 Early voting has started in North Carolina. Many cities are electing their City Council representatives. BUT NOT RALEIGH. The citizens of Raleigh will have to wait until November to elect their City Council. A full year AFTER the current council’s term was supposed to end. Just like Seinfeld’s infamous “Soup Nazi,” Mary-Ann Baldwin decided, NO VOTE FOR YOU!

Why, you ask? Because Mayor Mary-Ann Baldwin and her council majority decided in secret, with no public notice, no public hearing and no public vote to ask the NC Legislature to amend the state law moving all other local elections to the spring primaries, which are taking place NOW, to hold Raleigh’s election in November instead.

Even more shocking, by making this move, the format of the election has also been changed. Raleigh has always held a Majority Election. But, this action changes the format to a Plurality Election. The winner no longer has to receive a majority of the votes to be elected; instead we will have a plurality election where the highest vote-getter is elected, even if their total votes are far less than a majority. There is no longer any possibility of a run-off between the two highest vote-getters to determine who the majority of the voters actually prefer.

Plurality style elections favor incumbents and this is the reason that Mary-Ann Baldwin forced the election to be held in November instead of now. You should recall that when she was elected in 2019 she actually got less than 40% of the vote. Her opponent could have called for a run-off, but did not. This time around there will be no opportunity for a run-off if no candidate gets over 50% of the vote. This is what Baldwin is banking on to give her an advantage for re-election.

North Carolina’s top elected officials and media agree that what the Raleigh City Council did was wrong.

Please note – ALL citizens of Raleigh should GET OUT AND VOTE for the federal, state and county primaries that are taking place now. It is ONLY the Raleigh City Council election that was taken away from you by Mayor Baldwin and her council majority.