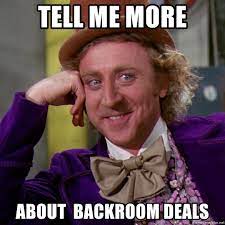 Social gatherings or other informal assemblies of the board are not official meetings unless they are held to evade the spirit and purpose of the Open Meetings Law. N.C. Gen. Stat. § 143-318.10(d).

Are 4×4 meetings where the city manager polls the entire Council a form of evasion?

Prior to 2017, Raleigh City Council work sessions weren’t televised or recorded. The only way to find out what happened at the meetings was to read the post-meeting minutes.

The newly elected 2017 council took a positive step in ensuring transparency and openness in local government when they voted to allow televising and recording of City Council work sessions, just like regular Council meetings.

But apparently there are some topics that Mayor Baldwin’s Council doesn’t want to discuss during regular public meetings or work sessions, and yet that apparently don’t qualify as topics for a closed session.

Because four members of Council do not constitute a quorum, this does not technically violate the letter of the Open Meetings Law. But it assuredly does violate the law’s intent.

Raleigh residents have had enough of the Baldwin Council’s secret backroom conspiracies, e.g., withdrawing support from the CACs with no public notice or discussion, giving themselves almost an extra year in office by moving the elections to November 2022, and changing the election format to eliminate runoffs, thereby favoring incumbents.

Let’s demand an end to “four-by-four” meetings!  Let’s insist on openness and transparency in our City government!