More zoning buffers could be voted away: more folks living in the shadows. 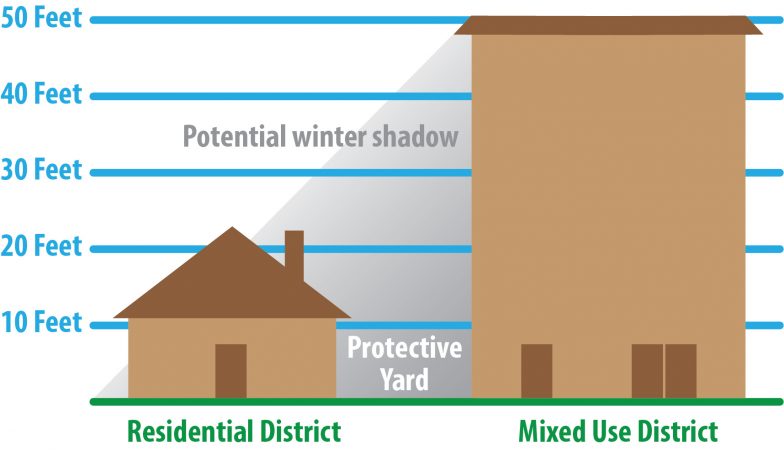 The Raleigh City Council will be voting on TC-6-20 this coming Tuesday, October 6th. This is a text change to the Unified Development Ordinance (UDO). While there are many scenarios that can result from this text change, the one scenario that nobody will like are the increased chances of living in the shadow of a 50 foot tall building next door to their home. Currently only RX-3 (primarily residential) can be built up to the protective yard. TC-6-20 will eliminate Zones C & B for any new buildings 50 feet or less. That will leave only Zone A, a “protective yard” to separate a house from all 50-foot-tall mixed-use buildings. This “protective yard” can vary in width. While we’re not sure of the exact measurements and the variables, we’ve heard it can be as little as 9 or 10 feet. (Please note: our diagram above has a much more generous “protective yard” than 10 feet.)

So imagine the consequences. Under the current zoning rules, you have 100 feet of separation from any structure 50 feet tall (except for RX-3). Under TC-6-20, that exception is extended to all mixed-use buildings. Now imagine if your home is on the north side of those 50-foot structures. During the winter, the shadow from those buildings will deprive you of sunlight for most (if not all) of the day.

Please read text change TC-6-20 and see if it makes sense to you. It doesn’t make sense to Livable Raleigh. We already have in place very reasonable transition zones between residential and mixed-use development. Who wants this text change and its consequences? We haven’t heard Raleigh residents demanding it. Who benefits from this text change that eliminates our current buffers? It’s certainly not average citizens who prefer not to live in the shadows.

Please email the mayor and City Council representatives to tell them you oppose text change TC-6-20, and ask them to vote NO on Tuesday.

For all City Councilors: citycouncilmembers@raleighnc.gov