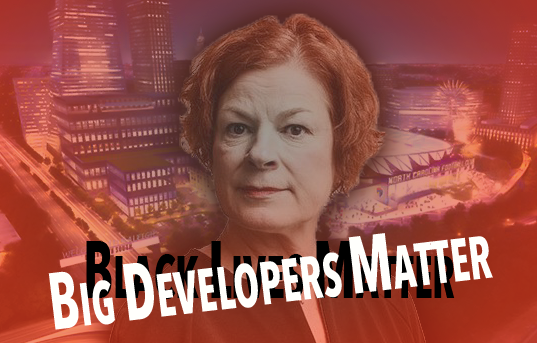 Raleigh citizens should not be surprised by Mayor Baldwin’s bewilderment about “Is North Carolina losing interest in racial justice and equity?”. (N&O Editorial, May 27, 2021)

An excerpt from the editorial is here. The full piece is available at the link above:

The exchange sounded like a caricature of the trouble Black people have being heard in North Carolina.

Quanta Edwards and Kimberly Muktarian, who are Black, spoke during a virtual meeting of the Raleigh City Council’s Safe, Vibrant and Healthy Community committee Tuesday to say that black people aren’t being listened to (details here) in a city where Black residents make up 29 percent of the population.

Edwards and Muktarian noted the city’s delay in creating an African-American Affairs Board while a similar Hispanic and Immigrant Affairs Board was established last year. And they pointed to a failure to adopt policing reforms, such as adding technology that would start a police officer’s body camera when his or her weapon is drawn.

“The city does not operate as though it believes its Black citizens,” Edwards said.

Mayor Mary-Ann Baldwin, who is white, said she was confused by Edwards’ complaint.

This isn’t the first time the editorial board of the N&O has taken issue with Mayor Baldwin and her cozy relationship with Raleigh’s development industry. Read their previous editorial, “Raleigh Mayor Baldwin should think again about taking a job with a city contractor”. (N&O Editorial, June 10, 2020)

Baldwin’s focus and priority is development and fulfilling the agenda of developers. Other critical city matters such as affordable housing, gentrification and police reform are mere nuisances. This is evidenced by her abolishment of Raleigh’s CACs, one of the most effective ways for black citizens to engage with city staff and council members (read more here); her failure to give the police advisory board any meaningful powers; her inexcusable slow-walking to form an African-American Affairs Board and her dismissive, condescending treatment of members of Raleigh Demands Justice. (Watch video here).

Developers need a rezoning? Baldwin gets it done. Developers wanted a Tax Increment Grant. Baldwin got it done. Black citizens want and repeatedly ask this Mayor and council for actions on matters that are important to them and they get none. Instead, they get questions seeking clarity. What’s clear is that Raleigh’s black community deserves much better and a Mayor that will make them a priority.