“Let’s Be Clear: Downtown South does not have any affordable housing” 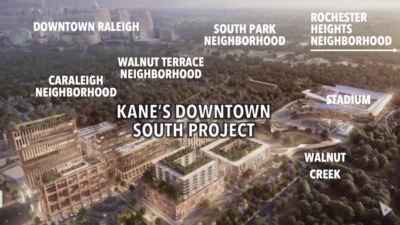 At City Council last night, Bob Geary, 202 East Park Drive, made the following comments about the Downtown South project. He is a former columnist for the Independent Weekly and a former member of the Raleigh Planning Commission.

Just before Christmas, you approved the up-zoning for Kane Realty’s Downtown South project. A nice Christmas present for John Kane. He contributes so much to your campaigns, so I guess you were being thoughtful?

I say that because your Planning Commission recommended, unanimously, 8-0, that Kane’s application should be rejected.

Councilor Cox, I do congratulate you for casting the one no vote.

So last night, WRAL reported that Downtown South may break ground this year, and have a soccer stadium, and tall buildings, and affordable housing, and —

Sadly, Downtown South does not have any affordable housing.

Actually, the project you approved contains zero units of affordable housing, and that’s out of a potential 18,000 units of housing – not any of it, zero out of 18,000 housing units, affordable.

Let’s be clear about that, especially when talking with the press.

At the 11th hour, Kane did commit to a little smidgeon of something. A few units to be rented at slightly below market-rate rents, but only for 5 years. Then they revert to market rate.

And even for those 5 short years, they will meet no one’s definition of affordable housing.

So now, Kane now has you – has us, as citizens — over a barrel. YOU’VE PUT US THERE.

We do want some affordable housing sometime, somewhere in Downtown South.

Too bad this Council didn’t make it a condition of Kane’s approval.

Now, it’s entirely up to Kane whether to allow any affordable units, and if he does, he’ll have his hand out for us to pay for it.

And before he’ll even think about it  – and he’s been very clear about this – he wants $200 million, or is it $300 million from the taxpayers, upfront, to spend on a big entertainment venue, that ephemeral stadium that Kane wants as a draw for a vast new retail shopping mall in Downtown South.

$200 million, $300 million – this is the so-called “Tax Increment Grant” that Kane wants that the mayor seems to have promised him.

We want affordable housing? He wants hundreds of millions of dollars in public subsidy first, for a stadium that we really don’t need, and then maybe he’ll consider it.

Great job on that rezoning, though.