Indyweek on Citizen Engagement, Raleigh-style: Out With the Old, In With … a Plan to Have a Plan? (Maybe With CACs! Just Like the Old Plan!)

In his 18-page report to the city council last week, Mickey Fearn—the consultant the city hired to study and make recommendations on how the city can best engage its residents with government processes and initiatives—all but suggests resurrecting CACs, or “community and neighborhood organizations,” alongside several other actionable initiatives.

“Whatever is going to replace the CACs, whatever it’s going to look like or do what they did, then the city needs to provide support for those organizations,” Fearn told the council during his final presentation at its meeting on March 16.

Jane Porter is the new editor-in-chief of Indyweek, where I was a columnist/reporter for quite a while. I worked with Jane, and I think very highly of her.

Jane’s story this week brings us up-to-date on the latest from the Smash-CACs front, and it’s an optimistic telling.

Jane sees light at the end of the tunnel in consultant Mickey Fearn’s report, which basically calls for the CACs to be restored and — as every one of us who ever served as a CAC chair were at pains to say — enhanced, improved upon and supported.

My take on Fearn’s report:

In Fearn’s defense, he did tell Council that citizen engagement MUST be at the heart of government — that’s what a democracy is, after all. Is it, in Raleigh? 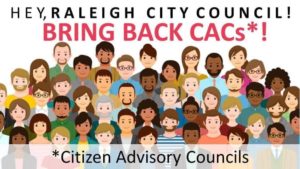 I’m not as optimistic as Jane Porter. Rather, I am convinced beyond doubt that Fearn’s study, and the year it’s taken so far, is a smokescreen to hide what’s really going on, which is:

Mayor Baldwin and her Council majority have ZERO interest in bringing citizens into the decision-making process of City government.

That is, to be blunt, why they set out to destroy the 50-year old network of Citizen Advisory Councils (CACs) 13 months ago.

It’s why they never miss a chance to criticize the CACs as “not inclusive” — as if the city’s years-long refusal to publicize even the mere existence of the CACs to Raleigh residents wasn’t the prime reason why attendance at the CAC meetings wasn’t better. (And yet, it was still pretty good, because a lot of citizens sought them out anyway.)

It’s why Baldwin & Co. have amped up their one-way system of communications with the public, where they both (in true Fox News-style) Report AND Decide what it is they’re doing and how great it is.

At last count, the City’s Communications staff numbered 29 full-time employees, whose job is decidedly NOT to engage with citizens, but rather to smother them in press releases.

I think Henry Sanoff, the NCSU professor emeritus who helped create the CACs in 1973, summed it up well yesterday in a comment he posted on Facebook:

“Unfortunately, the city has no vision, which is reflected in the fact that many of those elected have no vision. Hiring a consultant to help the city find itself is a reflection of poor leadership. Engagement seems to be a popular catch word which has no substance because there is no strategy for making that process effective for citizens. Creating additional bureaucratic layers actually creates additional barriers for effective communication.

“The original vision for the CAC’s was to make them more powerful with funds for local action, since people are motivated to participate if their voices are heard and they can effect change.”