In the Senate District 13 Democratic primary campaign, Patrick Buffkin stands out. In a bad way. 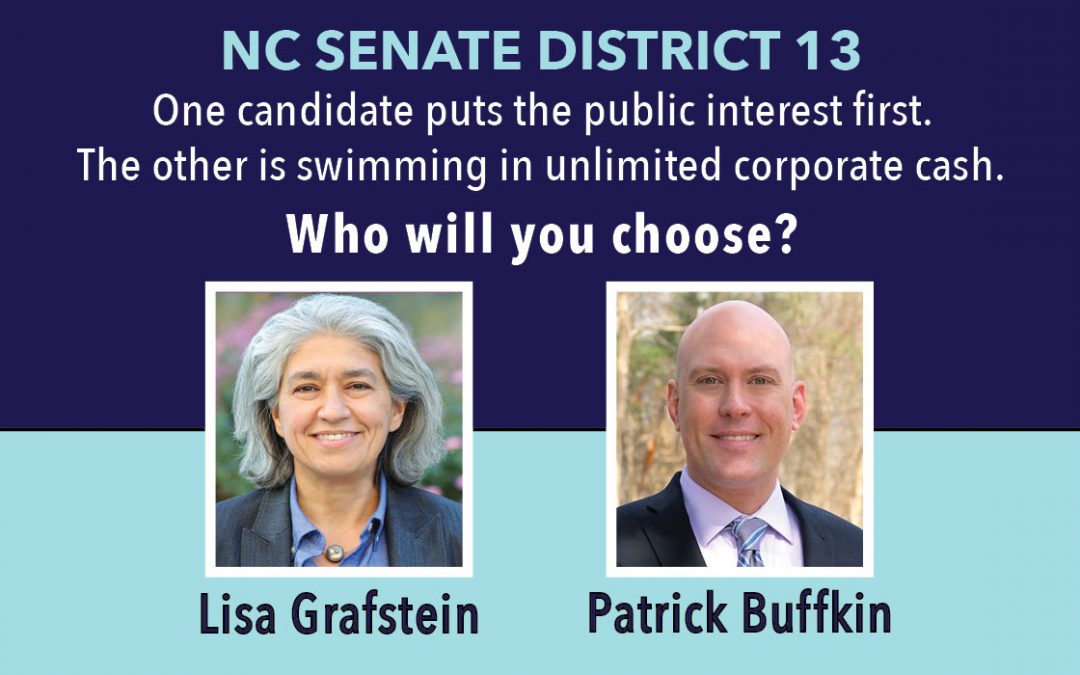 Livable Raleigh is not making endorsements in state legislative primaries. But we’re tempted in the N.C. Senate District 13 Democratic race. One of the candidates, Lisa Grafstein, is someone we know only by reputation, but it’s a stellar reputation. The other candidate is Patrick Buffkin, a first-term Raleigh City Council member whose dismal performance in office we’ve followed closely since he was elected in 2019.

Here’s what we see:

Grafstein is an attorney devoted to helping the marginalized and undervalued persons in our society. She views public service as a chance to lift up the less fortunate, not herself.  She’s worked selflessly for three decades as a civil rights and disability rights lawyer.

By contrast, Buffkin in his stint on City Council has done nothing except curry favor with powerful interest groups and developers. He has no time for ordinary citizens. He caters to the rich, and they lift him up and puff him up.

As one of his first acts in office, Buffkin voted to gut the Citizen Advisory Councils that were the main and often the only channels for ordinary people to influence the Raleigh Council’s decisions. That vote came with no public notice and no discussion. But, hey, that’s Buffkin. Indeed, we’ve seen him lash out when people who were not his campaign contributors questioned his decisions. He has no time for citizens, and no grace either.

Almost mechanically, Buffkin has voted to greenlight every development plan, good or bad, and for virtually every rezoning application that’s come before him. Never has he questioned whether they were in the public interest, as long as they were in the developers’ interest — and his own. In one very controversial case, alongside Shelley Lake, he made statements that were so inaccurate that listeners were left to wonder whether he didn’t know the truth or simply didn’t care.

Now, with the open District 13 seat beckoning, Buffkin has a chance to advance up the political ladder and serve his wealthy supporters in a higher office. No surprise, then, that his Senate campaign has wads of money behind it from these same special interests and developers. Voters have been deluged with mailers that make stunningly deceitful claims about Buffkin’s record, claims that are virtually the opposite of reality. Many of these mailers are paid for (read the fine print) by “the N.C. Property Rights Fund,” “the North Carolina Chamber,” and the “Home Builders Education Fund,” among other special interest groups. They know that Buffkin, if elected, will be in their pocket.

Meanwhile Grafstein is counting on voters seeing that their choice is between someone with substance and, well, Buffkin.

It’s Grafstein who’s done the unglamorous but vital work of running judicial campaigns for Democrats seeking N.C. Supreme Court and Superior Court seats. She’s been a board member and co-chair of the N.C. Justice Center. She’s practiced law in the civil rights and employment fields and, for two decades, she’s practiced at the nonprofit Disability Rights North Carolina. Take a look at her accomplishments.

On her website, Grafstein is eloquent about her purposes in running for the Senate. “Systems of power do not yield easily,” she writes. “I have spent decades fighting against the harms caused by bad policies.” She quotes the Rev. Desmond Tutu: “There comes a point when we have to stop just pulling people out of the river. We need to go upstream and find out why they’re falling in.”

In this primary, it seems that the “systems of power” are aligned with Buffkin and he with them. Only Grafstein is talking about going upstream and using her Senate seat to challenge the powers that be.