If Mayor Mary-Ann Baldwin tells you she wants to “brand” the city, WATCH OUT…. It’s gonna cost you…

“The project, accomplishing part of the City’s strategic plan to find a way to effectively tell Raleigh’s story, comes with a price tag of $226,000.”

“We’ve used the city seal as a logo,” said Mary-Ann Baldwin, the councilwoman who’s championed the project. “It’s not a logo. It’s the city seal.”

“The city seal will continue to be used for official government documents, but Graham said the logo is the solution to inconsistent branding across departments.”

In March of 2020 the city council decided to purchase custom bus shelters over standard shelters at an additional cost of $3,600 per unit.

“Mayor Mary-Ann Baldwin believes the updated design is worth the price tag.  This has been in the works for four years, she says. A lot of thought and intentionality has gone into this. I think not moving forward sends the wrong message to the community about the value of design.”

From the beginning, finding a way to elevate the GoRaleigh brand was important.

And, now the latest.  A downtown soccer stadium for a city without a soccer team. 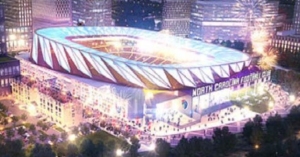 The developer wants $13 MILLION per year for 20 years or $260 MILLION dollars in PUBLIC funding (tax dollars) from the city and county to pay for this.  If this is such a financially feasible project, shouldn’t the developer be able to fund it without public financing?

Raleigh’s brand new city council has seen all the pretty renderings of the proposed Downtown South but Raleigh’s new mayor, who’s a big supporter of the proposal, wanted to gather the entire city leadership team together to walk, see and feel what this 160 acres of nothing could be. But to get the project off the ground, Kane also needs city and county leaders to help defer development costs. He’s asking for $13 million a year for 20 years from a special Interlocal fund of hotel tourism tax money.

“I love the proposal because it’s more than just a stadium,” says former Raleigh City Council member and current mayoral candidate Mary-Ann Baldwin. “It opens up a lot of opportunity to create a southern gateway for our city.” Baldwin says the stadium fits perfectly into this mold.

“The hotel industry agreed to tax themselves, as did the food and beverage industry, as long as the money was used to fund tourism projects,” she says.

“This definitely falls in that category.”

Despite Baldwin’s claim here, the hotel industry and food and beverage industry are not paying this tax, they are charging this tax to their customers. all of whom are not visiting from out of town.

In fact, many of them are low-income, homeless residents of Raleigh who live in hotels and rely on prepared fast-food to survive and are forced to pay this additional tax.