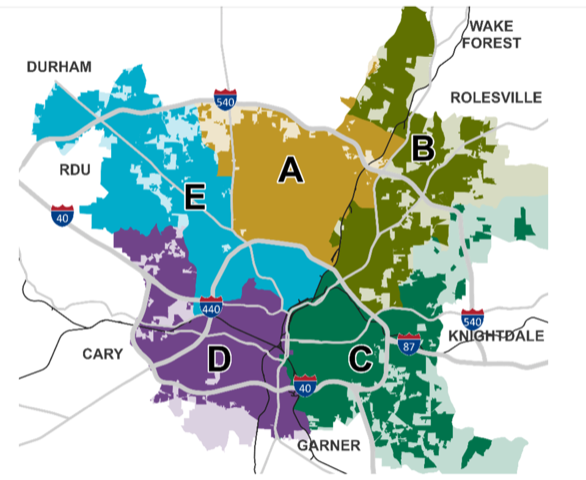 Midtown Raleigh resident Larry Helfant recently sent the following email to City Staff and the members of the Study Group on Council Terms and Compensation who now have been tasked with advising on redrawing of districts required after the recent census.

I attended the virtual meeting on Redistricting that was held on December 2, 2021. I appreciate the opportunity to observe and offer comment. I have several observations and suggestions. Of the many points that were raised during this meeting, several would be helpful as the committee moves forward.

1 – As mentioned by Sheryl Tung, League of Women Voters, it would be beneficial to know more about the members of the committee that are making core recommendations on salary, terms and redistricting. The committee was selected by the Mayor and Council and is unknown to the residents.

2 – I agree with committee member Harvey Schmitt that the members and public need more data before making recommendations. Staff has indicated that they have the data and will provide it upon request. From my point of view, Voter precinct populations would be helpful and perhaps could be added to the interactive mapping tool referenced on the web site.  In keeping with the notion that incumbents should not be paired in redistricting recommendations, there is no data to indicate the current residences of the incumbents.

3 – If you are going to use other demographics in making your decisions, such as locations of racial groups, this data should be provided to the public. It should be noted that this was the major objection to Scenario 3 from both guest speakers (League of Women Voters and NC Counts Coalition) because it had the greatest effect on the Green Road community without seeking their input.

Redistricting Objective and Staff Recommendation for District A

As I understand it, the goal of the redistricting is to balance the population of District A with the other Districts and to possibly reduce the population of District B since that district is approaching greater than a 5% bias. To achieve this, all three redistricting scenarios have one element in common. They all include adding Voting Precinct 01-46 to District A and removing that precinct from District B. By doing so, you are extending the eastern border of District A closer to Capital Boulevard. While this is a simple approach to balance the population bias, it also involves racial demographics that may not be evident to the public. Several members of the committee and guest speakers had the same concern and asked if that was within their purview. In keeping with guest commentary, please do not expand District A beyond Atlantic Avenue.

I would like to suggest an alternative scenario for consideration. Instead of adding population to the east of District A, add additional population by adding population south of the Beltline, similar to Scenario 3. This would encompass the area that closely resembles that of the Midtown – Saint Albans Area (MSA) plan. This would coincide with the request that was approved at the last City Council meeting – to have staff evaluate the creation of a Midtown Municipal Service District. The Midtown area is approximately a five-square-mile area that is bounded by E. Millbrook Road to the north, Atlantic Avenue to the east, and Six Forks Road to the south and west. While most of this area is already contained in District A, adding voting precinct 01-36, which borders the Beltline to the south of the current District A would approximate the area defined in the MSA.

– The expansion of North Hills Main with projected 12, 30 and 40 story buildings.*

– Further expansion of the Vines apartments as phase 3 is built out.*

– Construction of the Innovation District, a billion dollar investment which will include an 18-story high-rise for offices and a 200-unit apartment complex.*

– Completion of the Midtown Exchange, another billion dollar complex with twin 12 story buildings. In addition to the towers’ office and retail space, there will be approximately 1500 residential units.*

– Development of the NorthsideCenter, a multi-use complex containing 20 story buildings with the potential for 4,200 more dwelling units than previously zoned. **

–  Development of the Midtown Waterpark, a reimagined high-density residential area of 7 to 12-story mixed-use buildings with residential, retail and restaurants. **

*  north of the beltline in Midtown

** south of the beltline in Midtown

The northern and southern developments will be connected by a multi-modal bridge that will be built over the beltline and a pedestrian / bicycle bridge over the beltline, east of Wake Forest Road. Both will be anchored from Navaho Drive (District A).

Connecting the projected area south of the Beltline to the existing District A meets all of the criteria:

I have included an expanded area map so you can visually picture the precincts and geography of the proposed scenario for District A.

Contiguity as a Redistricting Condition

One final note – To properly expand District A to approximate the MSA mapping, portions of Voting Precincts 01-11 and 01- 12 should also be added since they both border the south side of the Beltline. If there isn’t a NC General Assembly mandate or a requirement of the Wake County Board of Election, you may wish to consider removing the need for Contiguity and defining Raleigh Districts on a geographical basis. Without knowing precinct populations, it is difficult to determine the impact on District E if Precincts 01-11 and 01-12 were moved to District A but it should be considered.