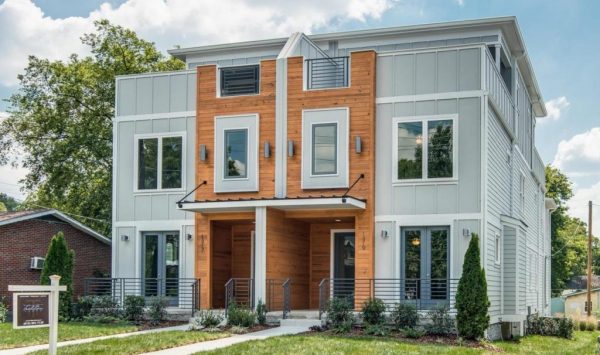 As written, TC-5-20 will accelerate the demolition of affordable units in affordable neighborhoods in favor of high-profit infill as shown here. Without affordability protections, TC-5-20 will only increase housing costs and accelerate Raleigh’s affordable housing crisis. Note how the new duplex towers over the small, affordable brick ranch directly next to it. And, gentrification marches on.

Raleigh City Council is holding a public hearing on Text Change TC-5-20 on July 6, 2021. The way I read this ordinance; single-family zoning will cease to exist. What this means is that a variety of different building types may start showing up in single-family residential neighborhoods. In my view, it’s possible that you may end up with a multi-unit building next door to your single-family home. In some districts duplexes are already allowed, but this proposed change would allow much larger units. In the current residential zoning districts (R-1, R-2, R-4, R-6, R-10) the permitted building height will be 3 stories or 40′ maximum. You can read the text change at the following link: https://cityofraleigh0drupal.blob.core.usgovcloudapi.net/drupal-prod/COR22/TC-05-20.pdf

If the Raleigh City Council passes this text change, it will slowly be spreading density all over the city. This means traffic will eventually be much worse than it is now. Density should be concentrated in locations adjacent to major traffic corridors so that attractive and efficient mass transit may eventually become the norm rather than the exception. The current course of the City Council spreading density everywhere has put Raleigh on the road to traffic perdition.

For a number of decades some real estate agents have not shown homes in older neighborhoods because they are “close to busy roads” or “there are too many rentals.” What happens when these older neighborhoods have an increase in multi-family rentals, and are owned by landlords whose exclusive concern is cash flow?  A few bad apples can do a lot of damage. Will some real estate agents steer people away from neighborhoods where there are “too many rentals,” or are along a busy corridor these agents find distasteful?

Larger buildings on a lot will result in larger rooftops. If this is combined with on-site parking the result will be increased stormwater. Will sewer lines handle increased flows?  There are many subdivisions in Raleigh where –if cars are parked on both sides of the street–there will only be a single lane for traffic to pass through. How will the extra traffic be handled? Will eliminating single-family zoning all over the City of Raleigh result in easy access to mass transit? How much tree loss will occur especially in older neighborhoods where our last “suburban forests” are located?

There is a notion out there that simply increasing density will solve all of our housing affordability and low inventory problems. It’s not that simple.

There is a notion out there that simply increasing density will solve all of our housing affordability and low inventory problems. It’s not that simple. Density is most useful along transit lines, be they light rail or bus. Density everywhere will just make traffic problems worse. I suspect that there may be a fair number of Raleigh subdivisions whose restrictive covenants/HOAs would not allow multi-family units. How many other subdivisions with restrictive covenants like these are in the City of Raleigh? This is an item that needs to be thoroughly researched by Council members.

My subdivision has no restrictive covenants in force, and we are vulnerable to having too many rentals. Our subdivision, like many others, are already home to duplexes that fit well-scale wise—into the neighborhood. These are not the problem. It is when you start adding three or more units that can have three stories with a maximum height of 40 feet that the problems arise.

It bothers me greatly that in past years some real estate agents have steered people away from affordable subdivisions like mine because they felt there were too many rentals. These agents just made the situation worse because they made the neighborhood sound less desirable, and in order to be able to sell a house, an owner would have to drop the price. Fortunately, that problem has been minimized due to the ongoing inventory shortage we’ve been experiencing in this market.

I would hope that the Raleigh City Council, as a part of the decision-making process, would perform the due diligence necessary so they will know what percent of the single-family housing stock in Raleigh is not protected by restrictive covenants, overlays, etc., that will bear the brunt of any new regulations. It’s impossible to make an informed decision without this information. Neighborhoods in Raleigh with the most expensive land costs will probably not be affected. However, neighborhoods with less expensive land costs will bear the burden of increased density.

A majority of Raleigh City Council members believe that abolishing single-family zoning districts will result in more affordable housing. They are sadly mistaken in this belief. Truly affordable housing could be purchased by people who make 30%, 50% of the median income of Wake County. What this proposed ordinance will allow is the building of market rate housing that the folks in the aforementioned categories will not be able to afford. And, since ADUs are now permitted, will an ADU also be allowed to be constructed behind the multi-family building?

Very few citizens in Raleigh are aware of this potential major change. I have not seen anything on any of the various news medias in Raleigh. People who purchased homes in single-family detached neighborhoods did so because they wanted some yard space, and with an expectation that the zoning would remain the same. If they had wanted to live in a neighborhood with three or more units, they would have made an informed decision. This proposed change would pull the rug out from under their investment.

One last question. Is the current TC-5-20 the current version, or will there be another version with last minute changes where citizens will have no time to think and comment on them