Dear Mayor and Council: Your Time Is Running Out to Fix the 2020 Affordable Housing Bond Proposal Livable Raleigh sent the following letter to Mayor Baldwin and the City Council, which is scheduled to meet Tuesday, Sept. 1 at 1 p.m., evening session and public comment at 7 p.m.

I’m writing on behalf of Livable Raleigh with serious questions about the City’s proposed $80 million bond issue for affordable housing. Livable Raleigh is an active participant in the Wake County Housing Justice Coalition. Our position is consistent with the Coalition’s concerns as expressed to you repeatedly since February – valid concerns that, so far, you have chosen to ignore.

Now, you are literally racing the clock. Mail-in ballots will be received and cast by Raleigh voters beginning in a matter of days. Unless you act in the coming week, voters will be forced to guess what the bond is for, because you will have failed to tell them.

Specifically, we urge you to spell out, in detail, how the $80 million will assist those Raleigh residents who are in the greatest need for safe, affordable housing, as explained by the City’s official Consolidated Housing Plan.

16,685 households in Raleigh with very-low incomes pay more than half of their income in rent. That number comes straight from the Plan.

The Covid-19 pandemic only worsens their deprivation.

Since February, the Housing Justice Coalition has asked you to make these specific program commitments:

On June 2, the Coalition sent you a 14-page letter with detailed recommendations to improve the bond package. You never replied.

Before and after that date, Coalition members held extensive discussions with experts, including Durham officials who helped win approval of the Bull City’s more ambitious $95 million bond issue in 2019.

As Durham Mayor Steve Schewel told you directly when you invited him to speak to you last December, the key to Durham’s success was exactly what we’ve been asking for:

We learned that Raleigh spent $46.8 million over the last 5 years to subsidize so-called “affordable housing” projects that mainly benefitted moderate-income families, up to $55,000 a year and in some cases more.

City funds were designated to assist 2,709 units of new housing over 5 years. Only 87 units were intended to be affordable by low-income families. The rest were not.

There’s something wrong with Affordable Housing if the poor are excluded.

During the webinar, we issued a simple recommendation:

Add the $80 million bond money over a 5-year period to assist low-income families and those without homes. Use it only for this purpose.

With new money from the bond issue, create new programs that aid our historically African-American neighborhoods.

We trust that you will take our concerns seriously. We know that you want this bond issue to be approved. But unless policy commitments are made and soon, the voters will not have enough information to cast an informed vote, and many may vote no.

You have it within your power to set this right. Please, while there’s still time, do so.

A CALL TO ACTION: – Click Here to send an email to Council, urging them to commit the bond funds to Raleigh’s Essential Workers and Families Facing Evictions 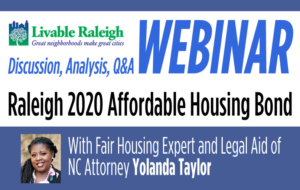 Do you want more details about the Affordable Housing Bond?  Check out these resources from Livable Raleigh’s recent Bond Webinar –

View the Webinar Questions and Answers