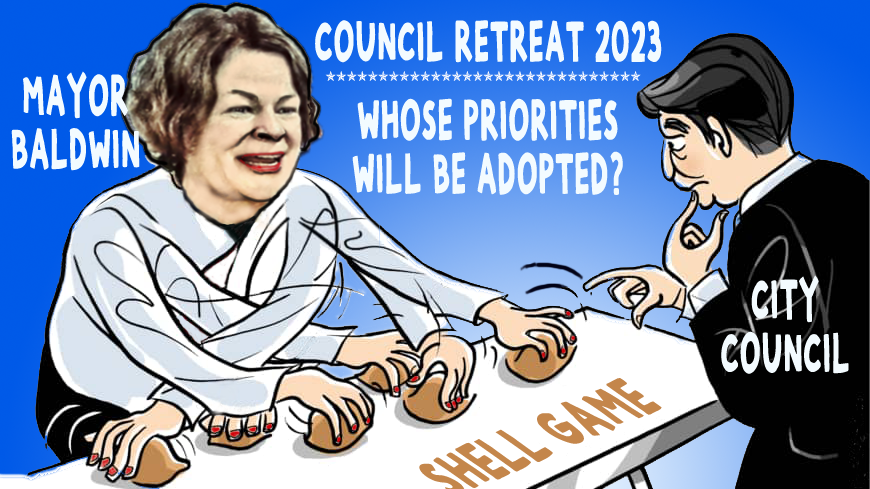 Mayor Baldwin knows the most important goal of City Council’s upcoming retreat (Jan 27-28) is to set strategic priorities for action in the coming term. She also knows that the chances of her priorities prevailing will depend on her ability to prevent competing Council priorities from being adopted. That is why the first line of defense in Baldwin’s retreat agenda this year is to make sure it is chock-full of plausibly interesting things to see and do, minimizing the time available for other Councilors’ ideas about the future of Raleigh.

You’d expect that a discussion of Council Priorities would happen at the beginning of the retreat, so that each Councilor’s strategic goals would set clear markers to frame and focus all of the other activities. But in Baldwin’s agenda, Council Priorities show up late in the second and final day, and only after staff has already detailed their billion-dollar budget work plan for the coming year, a plan whose Council stamp has only been set in private meetings between the Manager and Mayor.

When Council Priorities finally take center stage, Baldwin’s next line of defense against competing priorities is to make sure they include no agreement to set concrete goals, budgets or schedules. Baldwin’s insistence on ‘flexibility’ in all things eliminates the need for performance metrics or accountability that would force staff to plan for real deadlines or budget for real outcomes. So long as competing priorities are loosy-goosy, the Manager and her key staff have no accountability for them and no incentive but to serve Baldwin’s industry-driven power and influence agenda.

Mayor Baldwin transformed much of Council’s 2020 retreat into an infamous half-day infomercial and field trip for John Kane’s Downtown South mega-development site. Baldwin’s vision for this year’s retreat is even more audacious: In order to conceal from public view her self-serving style of power-brokering, the plan is to hold the first day of the retreat at an undisclosed Durham location with no livestreaming for public access or interaction.

The second day’s diversions are no less brazen: When new Councilors finally get a chance to offer big ideas for a city budget that is more progressive, inclusive, accountable and environmentally sustainable (all things that rub Baldwin and her industry donors the wrong way), Baldwin has suggested, instead, filling up most of the afternoon with a field trip to a museum with cool exhibits, or better still,  another bus trip / infomercial to John Kane’s Downtown South site. You cannot make this stuff up!

The last 3 years of watchdogging Mary-Ann Baldwin have taught us two undeniable facts. Fact #1: Baldwin’s idea of governing is all about building her power and influence by glad-handing, bullying and cutting backroom deals.  Fact #2 is that public involvement in Council decisions makes backroom dealing difficult, so Baldwin always comes up with ingeniously phony reasons to suppress both the public and independent-minded Councilors in important decisions like: eliminating CACs without a replacement, redistricting Council boundaries to suppresses minority voting power, and giving herself an extra year in office without any public input or public vote.

Bring the best and brightest ideas to life

Baldwin’s approach to this year’s Council retreat is one more opportunity to snow the public, the media, and new Councilors by suppressing competing views and keeping progressive goals as vague as possible so that accountability can never be measured, except by Baldwin’s own self-serving media sound bites. Let’s hope the new Councilors – and last term’s returners – will set aside Baldwin’s attempts to once more hijack the retreat for her own personal gain.