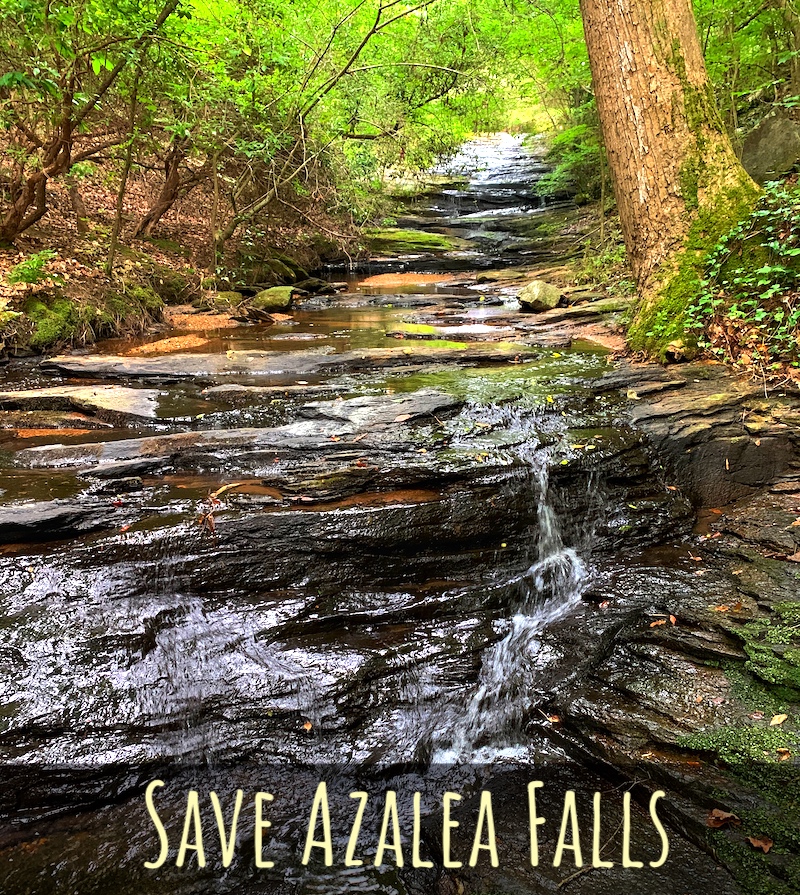 Azalea Falls was the subject of a prior post on this site. In it, we called on City Council to reject a developer’s application to up-zone a major portion of the property — allowing a high-density apartment project that would destroy not just that portion but the whole shebang.

Twice, Council has postponed a decision, at its meetings on Sept. 1 and Sept. 15. But the discussion Sept. 15 indicated that approval is imminent and likely to come in October.

Unless public opinion stops them.

Azalea Falls is an environmental jewel, designated officially by the NC Department of Natural and Cultural Resources as a Natural Heritage site of statewide ecological significance.

Part of the property — the portion along Crabtree Creek — is owned already by the nonprofit City of Oaks Foundation, whose mission is to preserve important environmental assets for the people of Raleigh.

If the up-zoning is rejected, the rest of the property — a steep hillside above the City of Oaks holding — could be acquired and preserved as well.

As it should be. (See below for the how.)

Here’s a link to the City of Oaks Foundation’s website, which shows Azalea Falls to be, as we say, a jewel.

Jewel or not, Mayor Mary-Ann Baldwin signaled her intention to press ahead with the up-zoning at the Sept. 15 meeting, calling on District A Councilor Patrick Buffkin to make the case for it.

Buffkin, an attorney, promptly took the developer’s side, trying to argue that a provision of the up-zoning request — in legal terms, a condition offered by the developer — would somehow protect the Falls even as the stripping and mass grading of the wooded hillsides  that are integral to it proceeded. But it was not immediately apparent that this made any sense, so Buffkin resorted to cross-examining a citizen who disagreed with him.

That citizen happened to be Chris Heagarty, executive director of the City of Oaks Foundation.

Buffkin was insistent that stripping the trees from the hillside would not damage the site. Did Heagarty agree?

Heagarty did not agree, and he said so quietly, which caused Buffkin to push harder.

Buffkin (leaning in): Do you see any undue environmental harm resulting from this project going forward?

Heagarty (calmly): Councilor Buffkin, I honestly don’t have the answer you want to hear. But yes, I do think the project causes environmental harm. Any time you go in and take down rare native species, and destroy native habitats, it is going to have environmental impact.

Heagarty was simply stating what should be obvious to everyone on Council:

The steeply wooded hillsides above Azalea Falls are CRITICAL to Azalea Falls’ unique and exceptional forest ecology and aquatic habitat. The hillsides and the Falls, in other words, are one and the same!

[Think whether you’d still have a car if someone destroyed the engine and the transmission.]

Again, this is spelled out in the NC Department of Natural and Cultural Resources designation of the Falls’ ecological significance.

No wooded hillsides, no Azalea Falls.

Finally, Buffkin resorted to the classic up-zoning threat, which goes like this: “If the developers don’t get their way, things could get much worse for you!”

We recall a now-retired Raleigh Planning Director who called this kind of development threat ‘the Darth Vader scenario.’

The threat here: If not allowed to strip the hillside for high-density development, the developer could choose to strip it anyway out of sheer destructiveness, dumping mud on the City of Oaks property below.

Which meant, to Buffkin, that the high-density development would have no “environmental impact.”

“I have to be honest,” he said. “I can’t tell you that [the project] won’t have an environmental impact.”

Heagarty, in short, wasn’t giving cover to Buffkin, Baldwin and the rest of the Council majority, which seems determined nonetheless to allow this senseless destruction of a rare woodland oasis. 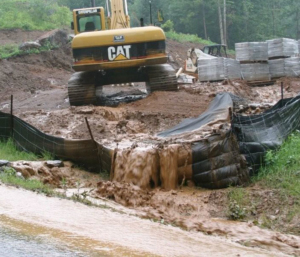 And what of the other Council members who brand themselves as environmentalists (we’re looking at you, Nicole Stewart and David Knight). They sat through the meetings in stony silence, unwilling even to utter the name ‘Azalea Falls,’ for fear of drawing Baldwin’s wrath.

In 2052 more than 200 acres of land connecting Azalea Falls to Umstead State Park will be donated to the City of Raleigh for parkland — it’s now a quarry — and it will complete the Crabtree Creek Greenway across the entire city of Raleigh.

This is not the time for Council to be motivated by the insignificant short-term profits of the Z-47-19 parcel owner, which happens to be one of the largest construction conglomerates in North America. Instead, Council should look to protect one of Raleigh’s most precious environmental assets.

How? Simply buy the Z-47 parcel, tax valued at $1.7M, and add it to the 200 acres that will ultimately be given to the City. Better still, work with land owner Leigh Hanson to secure a tax-benefited charitable donation of the Z-47-19 parcel to an organization such as the Conservation Trust For North Carolina. At Council’s October 6 meeting: Save Azalea Falls.