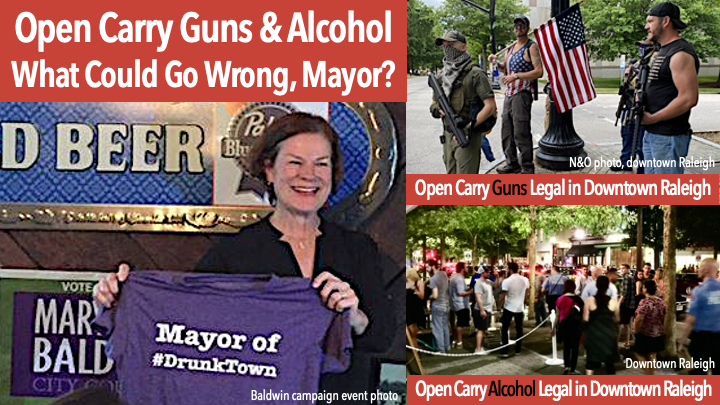 It’s been awhile – 7 years, in fact – since Mary-Ann Baldwin dubbed herself the “Mayor of Drunktown.” Raleigh Drunktown.

This was in the wake of controversy over Raleigh’s policy of allowing drinking on downtown sidewalks. Which led to downtown vomiting on store and office doorsteps, but hey, Baldwin was on the side of bar owners and “vibrancy.”

That was then, when Baldwin was a member of City Council. Now, as Mayor of Raleigh, Baldwin is behind the new “experiment” to allow drinking not just on sidewalks but everywhere, including in the streets, in a so-called “Downtown Social District.” The experiment starts in August. City leaders approve Social District.

Well, no surprise that Baldwin’s idea of vibrancy is lots of alcohol. We’ll drink to that.

But wait, it’s also the case that state law allows the open carry of firearms not just in downtown Raleigh but everywhere. Raleigh has seen its share of armed “Proud Boys” and other “Patriots” on downtown streets already.

What we haven’t seen yet – but may soon – are armed drinkers in the streets, with our under-staffed police force watching and, uh, watching – because drinking while armed will be perfectly legal.

Until, of course, some drunk with a beef pulls a gun.

A blunder by Baldwin? Or just more campaign cash for her from the bars.