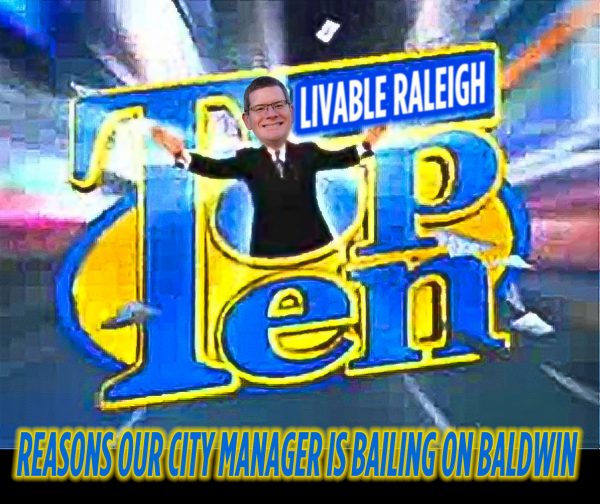 Ruffin Hall, Raleigh’s mild-mannered City Manager, up and resigned on Wednesday, mid-pandemic. With no explanation except the classic “he’s looking for new challenges.”

Asked if he has another job lined up, he said no.

Ruffin is 50. He is married and has a family. It occurred to us that a careful bureaucrat like Ruffin wouldn’t quit his high-paying gig, with Raleigh in turmoil, and the city looking to him for leadership — and with no new job lined up — unless the working conditions at City Hall were intolerable?

Which, given the mayhem on City Council and the, uh, off-putting presence of Mayor Mary-Ann Baldwin, they very well may be.

10That soccer stadium. Ruffin knows it’s a waste of money. But Mayor Baldwin has promised it to her patron, uber-developer John Kane, and she keeps shouting in Ruffin’s ear.

9With Baldwin determined to give every developer free rein, the stress on Raleigh’s infrastructure is at the breaking point. Ruffin’s a numbers guy, he sees the tax rate spiraling higher in coming years, while city services deteriorate.

7Baldwin was literally asleep as downtown Raleigh exploded on Night 1 of the George Floyd protests. The police chief reports to Ruffin; the two of them took the heat for the tear gas/riot gear response. The mayor: MIA.

6A day later, on the infamous Night 2, Baldwin refused to establish a curfew, and the destruction escalated. Again, Ruffin and the police chief took the heat as downtown Raleigh was laid waste.

5After that, Baldwin handed her gavel to since-departed Councilor Saige Martin to conduct a special police-bashing session for angry protesters. Martin ran it like a game show, smirks & all. Ruffin was put in the corner, a hapless bystander. Probably didn’t feel good since, as noted, the police report to Ruffin.

4Baldwin’s $80 million bond issue for affordable housing is a blank check. She wants the voters to pass it, and she’ll get back to them on how it was spent. She was visibly steamed, therefore, when Ruffin sided with Councilors Cox and Branch, who want the spending policies set BEFORE the bond issue goes to the voters.

3 Ruffin had his staff working closely with the Citizen Advisory Councils, because it’s better if citizens know how their government works. Oops! Baldwin, with Saige Martin as her tool, summarily abolished the CACs, with no advance notice and no debate allowed. So much for citizen engagement. (6-2 vote; Cox and Branch voted no.)

2 Baldwin’s job with Barnhill Contracting is a big screaming conflict of interest, for her and for anyone else in city government who gets caught in their mess. Ruffin doesn’t want to go to jail.

And, THE NO. 1 REASON RUFFIN HALL IS LEAVING:

Ruffin Hall is the ultimate team player, who shares the credit and shoulders the blame. Baldwin is the ultimate me-me-me politician, quick to take credit, but a hot temper when things go wrong. And right now in Raleigh, what ISN’T going wrong?

Then again, Ruffin may see the handwriting on the Election 2021 wall if the unpopular Baldwin is voted out and her Council allies go down with her. A new Council might choose a fresh start with a new Manager.

Better to get out of Dodge while the getting is good.