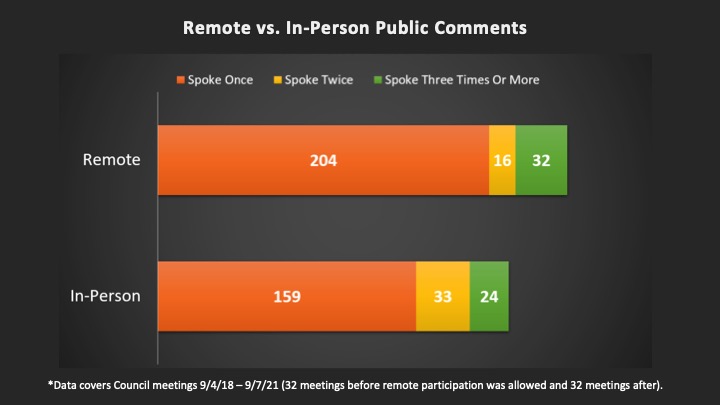 Chantelle Miles is a long-time resident of Raleigh. She currently resides in District A. Chantelle delivered the following remarks remotely at a recent Raleigh City Council meeting.

First, I would like to address a statement Councilor Stewart made at a recent meeting. She said that it’s the same people who participate in public comment time after time, but this simply is not true. I collected data from City Council minutes for September 4, 2018 to September 7, 2022 for a total of 64 meetings: 32 meetings before Council began meeting virtually and 32 meetings after. You can see this data displayed in the bar graph. During the virtual meetings, participation in public comments increased 17%, and the number of individuals that spoke only once before council increased 23%.

Given this data, particularly the 23% increase in one-time speakers, can we please drop the tired, false narrative that only the same people engage in public comment? Even if this were true, which it’s not, let’s not begrudge people for exercising their right to free speech and to petition their elected officials. We are living in seemingly unprecedented times, and it would be kind on your part to show ALL the people you are elected to serve some grace.

I encourage all those who are running for Raleigh City Council in the upcoming election to support allowing virtual public comments at in-person meetings, and to at least make their stance known on this issue.  It is certainly not unlawful for the city council to allow this practice regardless of what the city attorney says, and, in fact, it embodies the spirit of the laws that currently govern public meetings. It would also go a long way towards making city government more accessible to those who do not have the time, transportation, or good health to attend in-person.