Accessory Dwelling Units (ADUs) to be discussed at March 17 meeting

The Planning Commission’s Text Change Committee will be discussing Accessory Dwelling Units (ADUs) at their March 17 meeting. Raleigh Real Estate Broker and Appraiser Bob Mulder recently sent the following memo to the Planning Commission. In it he discusses concerns about the inability of municipalities to require owner occupancy of a primary residence with an ADU, the impact of ADUs on neighborhoods without restrictive covenants or HOAs, and the importance of increasing density where it makes sense in terms of traffic and environmental impacts. 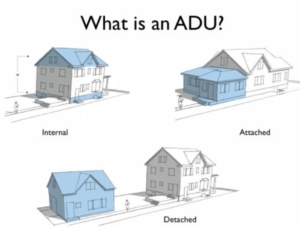 To: City of Raleigh Planning Commission

A Wilmington, NC court decision in 2008 (City of Wilmington, Plaintiff v. Broadus E. Hill, Defendant No. COA07-11) disallows municipalities to require that a primary residence with an ADU be owner occupied. An investor could build an ADU and rent both units. There would not be any owner supervision. ADUs will not proliferate in neighborhoods with high price points. Investors will be drawn into the older 1960s era subdivisions where housing is more “affordable” ($200,000 +/-). To me, affordable means a single-family home priced around $100,000 that can be purchased by a first responder or someone who works in a retail or food service job. Affordable rents would be less than $1,000 per month. Homes in the $100,000 +/- price range are not being built due to the cost of land, and rents less than $1,000 a month are an endangered species, soon perhaps to be extinct. Will an owner of an ADU charge a rent affordable to people with first responder or service jobs? No, the rent will be what the market will bear.

For a number of decades some real estate agents have not shown homes in older neighborhoods because they are “close to busy roads” or “there are too many rentals.” What happens when these older neighborhoods have an increase in rentals with ADUs, and are owned by landlords whose exclusive concern is cash flow? A few bad apples can do a lot of damage.

More rooftops means more stormwater and more parking needed. There are many subdivisions in Raleigh where–if cars are parked on both sides of the street–there will only be a single lane for traffic to pass through. Will sewer lines handle increased flows?  How will the extra traffic be handled? Are ADUs transit-oriented development? How much tree loss will occur especially in older neighborhoods where our last “suburban forests” are located?

There is a notion out there that simply increasing density will solve all off our housing affordability and low inventory problems. It’s not that simple. Density is most useful along transit lines be they light rail or bus.

First: No lot shall be used except for residential purposes. No building shall be erected, altered, place, or permitted to remain on any lot other than one detached single family dwelling not to exceed two and one half stories in height and a private garage for not more than two cars.

Seventh: No structure of a temporary character , trailer, basement, tent, shack, garage, barn or other outbuilding shall be used on any lot at any time as a residence either temporarily or permanently.

How many other subdivisions with restrictive covenants like these are in the City of Raleigh? This is an item that needs to be thoroughly researched. I think it’s important that all of you on Planning Commission have read your own covenants—if you have any–to know what is or is not allowed in your subdivision before you make a recommendation to the City Council. My subdivision has no restrictive covenants in force, and we are vulnerable to having too many rentals. It bothers me greatly that some real estate agents have steered people away from affordable subdivisions like mine because they felt there were too many rentals. These agents just made the situation worse because they made the neighborhood sound less desirable, and in order to be able to sell a house, an owner would have to drop the price. Fortunately, that problem has been minimized due to the ongoing inventory shortage we’ve been experiencing in this market.

Lots of folks point to the AARP as a big supporter of ADUs, but they never mention the caveats. The AARP teamed with the American Planning Association to write model ordinances for ADUs. The models very clearly state that owner-occupancy is essential:

The model state act – “a municipal regulation requiring properties with ADUs to be owner occupied, either in the accessory unit or the principal unit, prevents deterioration of neighborhoods and is a regulation substantially related to land-use impact. Such a requirement is, therefore, a regulation of land use rather than a regulation of the user of land.”

The model local ordinance – [Minimal provision] A principal dwelling unit on a lot or parcel of land containing an ADU shall be occupied by the owner of the premises.

Anyone who says that AARP supports ADUs without mentioning these caveats is being misleading. Owner-occupancy is so fundamental to the AARP model ordinances that the documentation includes these explanatory notes:

Note: Courts may rule that a community has no zoning authority to require that a site with an ADU be occupied by the owner, on the basis that this regulates the land user rather than the land use (Ziegler 1995, 56A-8). However, on July 29, 1996, a California appeals court issued the only published court decision (issued by a court higher than a trial court) addressing the owner-occupancy requirement in the context of ADUs. In the case of Sounhein v. City of San Dimas, 55 Cal. Rptr. 2d 290, the court heard a claim by homeowners that the city’s owner-occupancy requirement imposed on their ADU permit was invalid; even if it were not invalid, it applied only to the “applicant” and not subsequent owners. But the court upheld the owner occupancy requirement as a “character of the property as owner-occupied” and further ruled that the requirement applies to all subsequent owners of the premises. Id. at 296. Such a condition attaches to the land, the court explained, in order to fulfill the legislative purposes in imposing the condition. Id. The purposes of the owner-occupancy requirement, the court noted, are to discourage speculation in residential properties that can make housing less affordable, to prevent the disadvantages of absentee ownership, and to preserve residential neighborhood character. The Sounhein case means that the owner-occupancy requirement for ADUs has now been directly addressed and upheld by a state court.

The optimal option includes both aspects of owner occupancy – requiring owner occupancy and allowing it in either unit – because both tend to facilitate the development of new ADUs. For communities that may not feel comfortable allowing the owner to live in either unit, the minimal provision requires the owner to reside in the principal dwelling unit. No favorable provision is recommended.

Many communities monitor ADUs to ensure that the owner still lives on the premises. A variety of methods are used to do this monitoring (see Section 6), including registration of occupants, certification of occupancy, and annual licensing of rental units with annual inspections.

Other communities require ADU owners to record the requirements of the ADU ordinance as deed restrictions, particularly the owner-occupancy requirement. The deed restrictions accompany the title of the property and give notice to all subsequent buyers of the occupancy requirement. Both the optimal and favorable provisions below require this registration. Various provisions of the model also address the issue of owner occupancy. Those provisions allow and support the requirement that the owner live in the larger or smaller unit (see the discussion in Section 2.E. of the model state act; also see Section 1.A.v. (7) – findings about benefits of owner occupancy – and the definitions of “Accessory” and “Owner-Occupant”). If a community adopts this ordinance but does not have a statute echoing these provisions of the model state act, it may want, with the advice of counsel, to include versions of those provisions in its zoning ordinance.

One final note. I would strongly encourage all of you, as a part of the decision-making process, to perform the due diligence necessary so you will know what percent of the single-family housing stock in Raleigh is not protected by restrictive covenants, overlays, etc, that will bear the brunt of any new regulations. It’s impossible to make an informed decision without this information. One other item to which you should give consideration is architectural details for an ADU. At a minimum, an ADU should use the same exterior materials as the principle structure on the lot.

Here is a link to that model ordinance. I call your attention in particular to page 18, section E.