There has been a lot of talk about missing middle housing since the city council approved a text change to legalize it (duplexes and townhomes) city-wide.

This is different from the campaign promise made by the mayor during her 2019 run for the office. In answer to a direct question of if she supported ending Single Family ZONING, she said NO.

Instead, she pledged adding this gentle density “close to transit corridors, employment centers and mixed-use centers and in neighborhoods where this type of housing currently exists”.

These are the locations where this added density makes sense because they have access to transit, services and the infrastructure to support it. These are the places where this housing would provide the most benefit to the community and the environment. 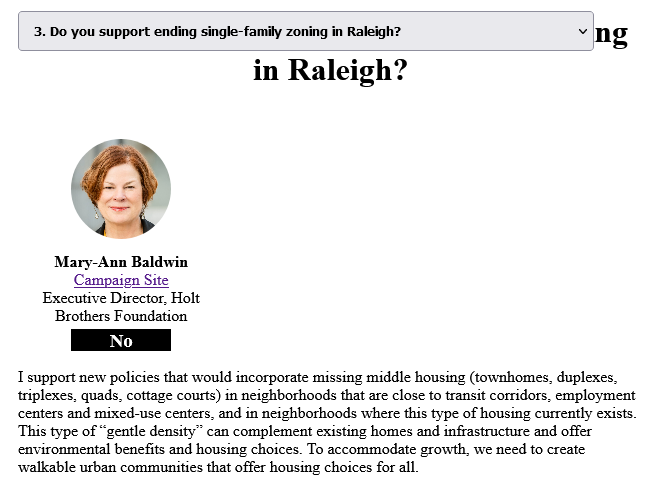 Read the full piece here: We asked you for questions. Here’s how Raleigh’s candidates for Mayor answered.

But, adding this density city-wide incentivizes developers to go where they can make the most profit as opposed to where they provide the most benefit for the community.

The proponents of this change have been justifying their support by providing links to what has been implemented in other locations and making the assumption that what Raleigh has implemented mirrors what has been put in place there.

Mayor Baldwin tweeted this article from Brookings to defend the new policy. If you read it you will find these excerpts:

“And with good planning, increased density in single-family neighborhoods won’t necessarily mean more cars competing for street parking. While our construction costs do not include structured parking, the site plans show that the townhouse scenario could easily accommodate one off-street parking pad per home, and the condo building could include some parking. Moreover, the developer could include deed restrictions that purchasers could not apply for residential parking permits (i.e., purchasers would have to lease garage spaces if they chose to own cars)”.

“First, it is possible to add more homes in single-family neighborhoods while keeping buildings at similar scale. When viewed from the street, three adjacent townhomes or six small condos can be constructed at approximately the same height and mass as existing single-family homes”.

You won’t find mention of either of these concepts in Raleigh’s newly adopted policy. And, certainly not any requirements for them.

Another proponent tweeted this article from Sightline Institute  discussing carbon impacts. Here is an excerpt from it:

Raleigh’s Missing Middle policy has no caps on square footage. And, it is the caps which bring about the affordability that was used to sell this policy to the public.

Here’s a reference to the Portland rules for residential infill again with another excerpt:

“The City of Portland is taking a fresh look at the rules that govern the types of housing permitted in our neighborhoods. The changes proposed by this project would allow more housing units to be built in residential neighborhoods, but only if they follow new limits on size and scale”.

But, one more time, Raleigh’s Missing Middle policy requires no limits on size and scale in return for the increase in density.

This is all right out of the same playbook the proponents of ADUs by right city-wide used when they pointed to Minneapolis as a success story for doing the same. What they failed to note at the time was that there was one very important difference between what Raleigh was proposing and what Minneapolis implemented.

In order to get the votes needed to gain approval of the policy in Minneapolis, they included a requirement that on any property with an ADU, one of the two units, the main house or the ADU, MUST be owner-occupied.

That requirement is illegal in NC. But, that requirement is what is making the policy successful in Minneapolis. You can’t implement half of a proposal from another location and then point to that location to justify your policy that doesn’t actually match it.

This council has a habit of implementing the parts of policies that help the development industry. But they either can’t, because of NC law, or won’t because they don’t want to, implement the part of the policy that ensures community benefit and protects the residents. They always seem to be missing that last golden piece of the puzzle.

A reader recently told Livable Raleigh they had overheard a contractor saying “This is the best council Raleigh has ever had. The developers tell them what they want done, and they go and do it.”