What to do when a rezoning request comes to your neighborhood 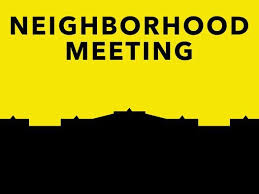 Did you receive a letter telling you about a neighborhood meeting to discuss a rezoning in your area? Or maybe some of your neighbors told you about an upcoming meeting.

These meetings leave much to be desired when compared to the process that existed prior to the City’s withdrawal of support from CACs, but may be the only opportunity for residents to get an early look at a rezoning request because, while some CACs are still operating without City support, many are not.

So, what should you do when you find out about one of these meetings?

1 – Be sure to attend every neighborhood meeting and take good notes or even record the session if you can. Send a follow-up email to the developers and copy City Council members (citycouncilmembers@raleighnc.gov) and Planning Commission members (Planning.Commission@raleighnc.gov) documenting any concerns raised and what, if anything, the developer proposes to do to mitigate those concerns. Get as many of your neighbors involved as you can.

4 — During the public hearing, each side is entitled to eight minutes total, so work with your neighbors to strategize about messaging and who will deliver it. The Mayor is very strict about timing. Learn more about public hearings.

5 — Definitely reach out to your District Councilor and share your concerns — the more people you can cite as also sharing those concerns, the better off you are. And don’t forget that, in addition to your District Councilor, the Mayor and both At-Large councilors are supposed to represent you. But because all councilors will vote on any rezonings, you should contact all eight of them. You can find out what district you live in by checking your voter registration or by entering your address on the City’s homepage

6 — Concerns about stormwater and traffic are important issues to raise.

7 – Finally, be prepared that the rezoning will get approved regardless of what you do. In its first 21 months, this council approved 105 rezoning requests and denied just four. However, by getting involved you may be able to get some changes made to the application and some more favorable conditions included in the final submission.