Patrick Buffkin Wants Taxpayers to Buy Him a Bridge to Wegmans 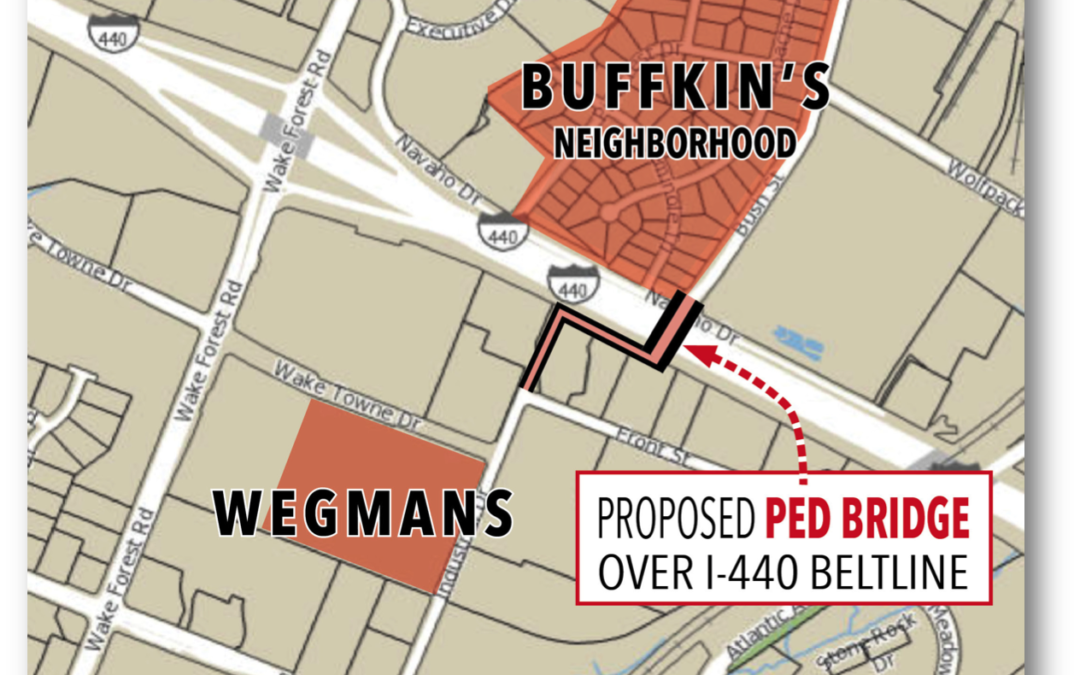 As most people know, the Midtown area has seen explosive growth over the last ten years, especially in the Saint Albans/Wake Forest Road area. There haven’t been any capital expenditures for road improvements to support the continuing commercial and retail development of North Hills East, Midtown East, or the upcoming Kane Innovation Center or Billion dollar Dewitt Midtown Exchange project. To correct this, the residents asked for and Council approved a Midtown small area plan a few years ago.

There were three bridges contained in the plan to enhance the walkability and traffic flow of Midtown. The one that is the focus today is a medium priority plan for a pedestrian bridge across I-440. It would connect the Wake Tech campus on Bush Street on the North side of I-440 to the recently approved Northside Center on Front Street across from Wegmans on the South side of I-440. This is visualized on the map shown above.

When the Mayor recently asked Council for ideas for additional Tax Increment Grants (TIGs), Councilman Buffkin (Midtown District A representative on the Raleigh City Council) quickly suggested this pedestrian bridge as a perfect candidate for a TIG. If you notice, Councilman Buffkin lives one block from the bridge location.

Many have asked me if there is a better way to pay for a bridge estimated to cost $5 million, other than using a TIG. I think the real question might be “Is a TIG necessary to fund the bridge?”

Let’s compare it to the Reedy Creek Pedestrian Bridge across I-440, commonly referred to as the Museum bridge, which links the NC Museum of Art to the Capital Area Greenway System. Through a financing partnership with North Carolina Department of Transportation, this $5M bridge only cost the City $600,000. Let me repeat that: The City received a public infrastructure benefit that cost 5 million dollars for $600,000. Why wouldn’t the proposed pedestrian bridge have similar funding agreement between NC DOT and the City? Also note the proposed pedestrian bridge location does not currently have any connecting greenways or even sidewalks along the main roads that border the Wake Tech campus and neighborhoods on the North side of the proposed bridge. Wouldn’t an expenditure for sidewalks for the neighborhood be a better public investment to facilitate the “walkability” of the Midtown Area?

Could Councilor Buffkin have picked a better use of TIG money in his area? Yes. On the Southside of the proposed bridge is The Northside Center, a proposed 34 acre mixed use development across from Wegmans. The rezoning project was recently approved without a TIG. The only condition that was added was for an easement for the base of the bridge. Note that this condition was not a public request.

Could this public benefit have been included in the rezoning for this project? One of the amendments of the aforementioned Midtown plan, is a recommended residential component for affordable housing. When a rezoning includes housing and buildings of seven stories or more, there should be inclusion of affordable housing. At least 10% of additional units beyond the current entitlement should be affordable at 80% AMI.

The Northside Center does include residential housing with at least one building of twenty stories. Rather than supporting this condition, the applicable policy of the Midtown plan was removed by the Planning Commission and Council to keep the rezoning in compliance with the Comprehensive plan.Why didn’t the staff or our city councilor negotiate with the developer for the addition of affordable housing and or the bridge? It would have been the perfect location with rail and bus access to support the City goal of affordability around transit.

In closing, while there hasn’t been any funding for road improvements or any other infrastructure element of the Midtown Area plan, robust development continues unabated without incentives. Why would we use money that could be used for serious infrastructure needs, stormwater control and affordable housing needs to fund a bridge that is not even on the capital improvement plan which prioritizes our top needs in the City?  Did the Mayor and Council trade a bridge for affordable housing? Wouldn’t the use of tax payer money be better spent for a high priority City goal of affordable housing as opposed to a medium priority pedestrian bridge? My answer is yes!