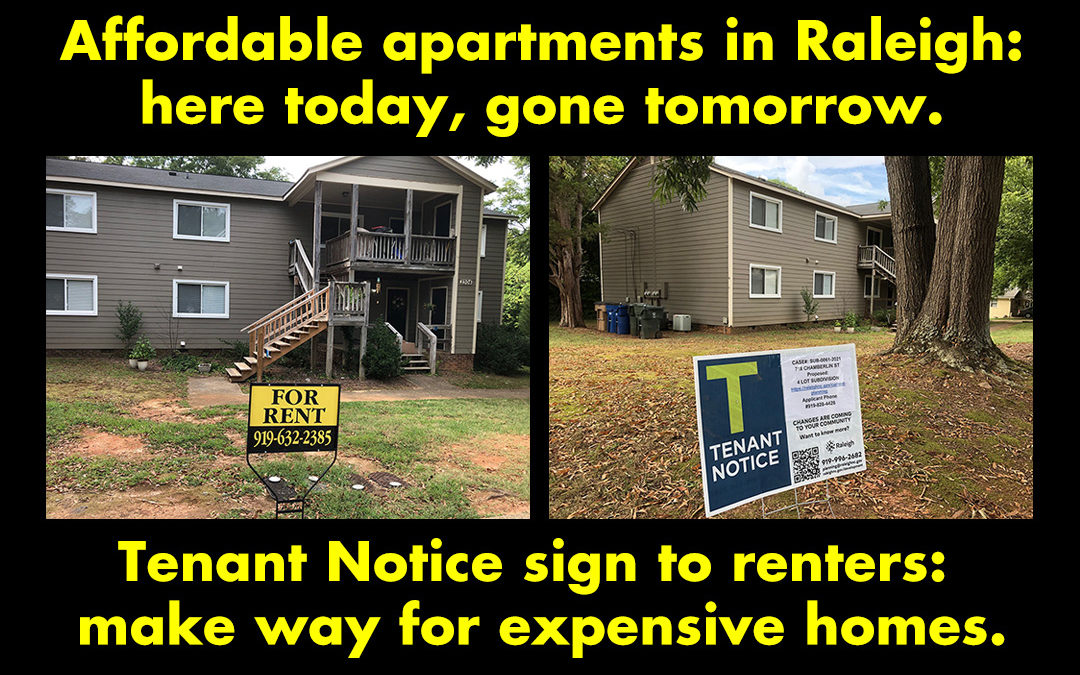 While Raleigh is booming, more and more folks are finding it harder to afford living in our City. Rents and real estate prices keep going up and up, while naturally occurring affordable housing (NOAH) is disappearing. The affordable apartments in these photos will be replaced by single family homes that only the wealthy can afford. Who is listening to the tenants who will soon be displaced?

Under the City’s new rules, the “T” sign in the right photo might be the only communication these tenants will get. Do they have the resources and time to deal with this situation? Can they organize on their own to fight this rezoning and their likely eviction? The placement of the sign and any mailing of notices are in the hands of the developer (applicant). So too is when and where meetings will take place about this rezoning case.

Before Mayor Baldwin and the City Council voted to abolish City support of CACs (Citizen Advisory Councils) in February of 2020, residents controlled when and where rezoning cases were to be heard by the public. That process allowed both renters and home-owners to organize through their CAC. Developers came to us residents and presented their case. A report from the CAC meeting, with the results from residents voting, was presented to City Council. Now reports to the City Council about rezoning cases are done by the developer. Who is the City Council listening to these days, residents or developers? Will our elected officials even hear the concerns of renters being evicted from their affordable apartments?

Is this the “fox guarding the hen house” or what?

Click this link to read a comparison between the CAC resident controlled meetings and the new developer controlled neighborhood meetings: Council to hear from developers, not the public