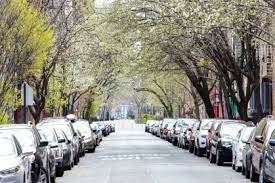 WRAL Reporter Matt Talhelm came over on March 25, 2022 to interview me about this issue. Unfortunately, my substantive comments were not included, and the one brief comment that elimination of minimum parking standards should be focused on transit corridors and that neighborhoods would be degraded was presented out of a larger context of comments I had talked about during the interview.

So, here to the best of my recollection is what I said, with a few extra comments added.

If a builder/developer were to tear down a house like mine and replace it with a four unit building for example, and there were two cars per unit, that would require 8 on street parking spaces. How would many older neighborhoods deal with parking when the most cars that can be parked along the curb fronting a new four-unit building is about three. The postal service will need an open spot to deposit mail in the mailboxes. As older neighborhoods not near robust transit (and we do not have that) start seeing an increase in multi-unit buildings, parking will become a huge problem. To think otherwise is not realistic.

There is an unwritten parking rule in most neighborhoods. While anyone can legally park anywhere they want to on a public street, it is common for people to park their cars only in front of their house. If they have a need to park their cars in front of a neighbor’s house, they will usually ask their neighbor’s permission. I can just imagine what the owner of a single-family home will think when suddenly there are four cars parked in front of their house, and their mailbox is blocked.

Some people are fond of pointing to Portland Oregon where there are no parking minimums. My brother lives in Portland, and he spends a lot of time biking and walking in Portland. He notes that older, and architecturally pleasing homes are being torn down and replaced by multi-story buildings with unappealing design and no parking. Parking is a major problem, and residents quite often have to hunt for parking spaces farther down the street, and lug purchases a few blocks back to their apartment. And, Portland has a good public transit system! We are not even close!

The elimination of minimum parking standards in the absence of a strong transit system that incorporates bus, light rail and dedicated/separated bicycle paths (like they have in the Netherlands) will degrade the quality of life especially in older neighborhoods without protective covenants. Neighborhoods with protective covenants and a Homeowners’ Association will not have to deal with any of these issues.

How many builders/developers who take advantage of the no minimum parking rule, will actually live in the building that they build? Very few I imagine. Once the building is finished and rented or sold, the residents will be left to deal with lack of parking and in many cases no good options for convenient, nearby transit.

If you’ve driven around any of the Raleigh neighborhoods where tear-downs are common, you will also notice that the lots have been clear cut. Fewer trees, more impervious surfaces, hotter neighborhoods, and more runoff.

As always, you are welcome to contact me with your thoughts and comments.