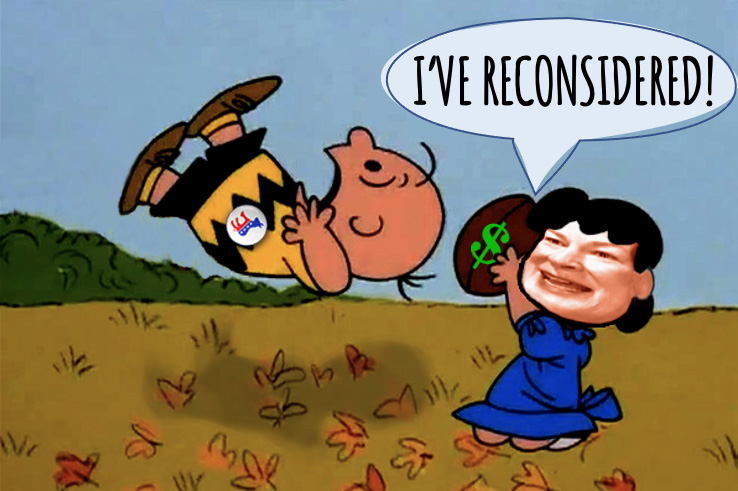 What She Means is: I Consider It, but I Always Say NO!

Mary-Ann Baldwin, the mayor of Raleigh, has some $500,000 banked for her election campaign. It’s a tribute to how completely she’s owned by Raleigh’s developers – led by mega-spender John Kane, a right-wing Republican known for backing, among other crazies, our very own GOP Lieutenant Governor Mark Robinson. (And, of course, Trump.)

This week Baldwin whispered in the ear of a gullible reporter that she was “reconsidering” whether to share some of her loot with Democratic candidates like Cheri Beasley, who is running for the U.S. Senate.

She implied to her scribe that she truly wanted to get behind Beasley but now can’t because the Wake County Democratic Party has just endorsed her opponent, Terrance Ruth, instead of her.

Therefore, Baldwin will be forced to hang on to her dough.

But did she really want to open her coffers to Beasley? If you believe she did, there’s a bridge for sale in Brooklyn … etcetera etcetera.

Baldwin is not shackled by the truth, let’s put it that way.

Actually, Baldwin has been given more than $630,000 for her re-election campaign, according to her mid-year campaign finance report, and she’s spent $130,000 so far. Virtually all of it on herself.

Contributions to Beasley to date? $250.

Out of $130,000-plus spent in the 2 ½ years since she took office, just $250 for the popular Senate candidate whose name Baldwin dropped as if they were besties.

When it comes to sharing with Beasley, it’s not something she seems to have considered in the first place.