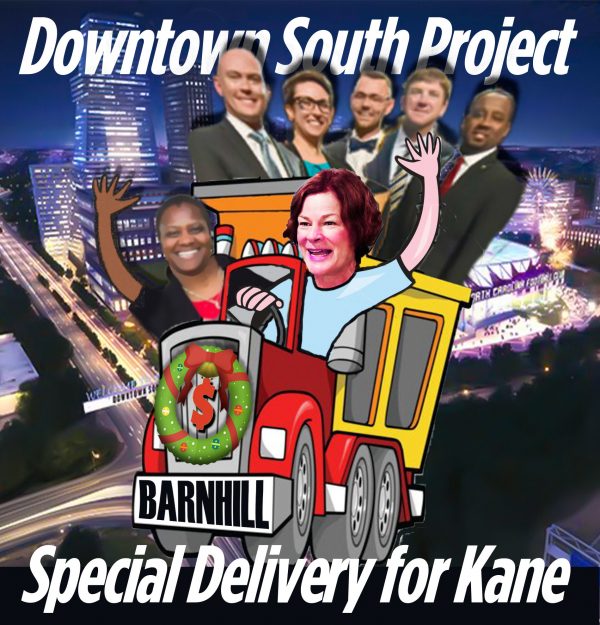 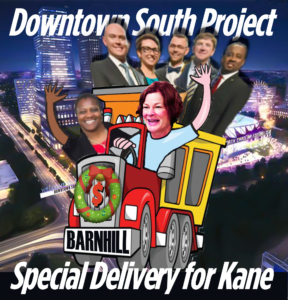 The Planning Commission is still looking at it, and City Council was not scheduled to meet again until January. You know, “Deck the Halls?”

Until, that is, Mayor Baldwin and her band of Council followers stepped in to fast-track developer John Kane’s “Downtown South” scheme.

Suddenly, as the result of their 7-1 vote on Tuesday, Council will hold an extraordinary extra meeting in December solely for the purpose of taking up Kane’s massive up-zoning application and conducting the legally required public hearing. The meeting/hearing is set for 7 pm December 15.

Approval could occur immediately following the hearing. Or, if not, Baldwin also set up an extra December 17 meeting, again, just for Kane.

Now, if you’re asking how Council can set a public hearing on a rezoning case while the Planning Commission is still gathering information about it —  good question!

Customarily, Council waits until the PC makes a recommendation, for or against. Then, at its next meeting, Council sets a public hearing for some future date. It’s unprecedented for Council to reach in and grab a case before the PC is finished.

But then, John Kane is this Council’s favorite, and he did contribute tens of thousands of dollars to their campaigns. (As he did to fellow developer Donald Trump’s campaign.)

By the way, the PC is allowed up to 90 days for its fact-finding efforts on a case, and the 90-day clock on Kane’s application does not end until January 11. The next PC meeting is December 8 — next Tuesday — and the Kane project is on the agenda, along with a half-dozen other cases.

By setting the public hearing for Kane a week later, Baldwin is in effect putting a gun to the PC’s head, telling them to finish up and get out of the way. Supposedly, the hearing is contingent on the PC being finished. But finished or not, the hearing is set.

Meanwhile, opposition to Kane’s “project” is growing, and Baldwin and her Council allies are obviously concerned that the more the public learns about it, the less they’re gonna like it.

The Planning Commission has been discussing Kane’s proposal since mid-October, and the more they talk about it, the more problems they see for surrounding communities. Problems like gentrification, displacement of residents, enormous traffic congestion on area roads, and especially the downstream flooding prospects as this giant “Downtown” is built on and around the flood-prone Walnut Creek.

The biggest problem with the Kane Realty scheme is that it is so un-specific. Kane wants the right to build 40-story buildings and 20-story buildings, but doesn’t want to give the first detail of what the buildings will be for or where on the site they will go up.

Of course not: Once the land is zoned for mega-development, Kane can sell it off, piece by piece, at huge profit, for whatever someone else wants to build.

From the developers’ standpoint, this makes perfect sense. But how is the community supposed to know what the impacts will be — the flood impacts, the traffic impacts, the gentrification impacts — when the developer has offered no specifics about what will be built?

The only prudent course is to assume that the buildings will be as big as possible, generating maximum negative impacts, unless Kane offers legally binding assurances that they won’t be — assurances that in a zoning case are called “conditions.”

Several PC members have suggested that Kane should withdraw the application and start over with a new one that lays out a “Planned Development” — one that shows the “what” and the “where” and offers specific community benefits such as parkland, affordable housing, a library, a job training center, something.

Remember, also, that the Kane site is in a federally designated “Opportunity Zone,” a Trump creation that was supposed to help disadvantaged communities but, in many instances, doesn’t.

So far, nothing in Kane’s application suggests that he’s got the best interests of the disadvantaged in mind.

Kudos to Councilor David Cox, the only “No” vote against fast-tracking the case, for pointing to the elephant in the room.

“This is supposed to be an Opportunity Zone,” Cox said. “Not an Exploitation Zone.”