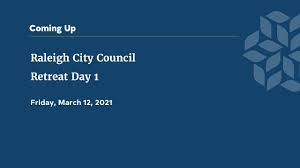 Raleigh City Council held their annual retreat at Dix Park Chapel. While the meeting was viewable remotely, members of the public were not allowed to attend, which is curious considering Council now requires in-person attendance for individuals who want to speak at Council meetings.

It also might be a violation of the Open Meetings Law.

The retreat facilitator was Michelle Ferguson from Raftelis.

Council member Buffkin was absent and excused for the first part of the first day.

Council member Cox was absent and excused the first day.

It was often difficult to hear the council members, speakers, and presenters as they were not diligent about using microphones.

Also council members alluded to having meaningful conversations at breaks and during lunch. These conversations took place away from cameras and microphones.

The COVID-19 pandemic has dramatically altered our world and the context for establishing policy. We will spend some time reflecting on how the pandemic has affected the City, the community, and individual views as a policymaker.

The City’s new Office of Strategy and Innovation was formed in December 2021. Staff will share an overview of the work and ideas that have been generated thus far, including future planned programs and initiatives. One of the responsibilities of the Office of Strategy and Innovation is to manage the City’s FY2021-2025 Strategic Plan. Staff will share highlights of progress that has been made.

Staff will provide a budget and financial outlook for the City.

Each member of the Council will be asked to share with their colleagues the three most important policies or initiatives they wish to accomplish this year. We will then consider individual priorities and understand the shared priorities among the governing body in the context of the FY2021-2025 Strategic Plan.

Philip Isley with the law firm of Blanchard, Miller, Lewis & Isley, P.A. will provide an overview of the current session of the North Carolina General Assembly. The following members of the General Assembly have been invited to participate in the discussion:

In October 2020, the City and the Shaw University Center for Racial and Social Justice (CRSJ) launched the Courageous Community Conversations initiative to “advance racial and social equity in the City of Raleigh, to work with community leaders, citizens, scholars, and business leaders for a solutions-focused comprehensive plan for positive change.” The CRSJ, in partnership with the Raben Group, took learnings that emerged from a community survey and public forums and incorporated them into a final report. Staff will highlight the many efforts that are underway to address the report’s recommendations.

[It’s a real shame that this Council majority chose to withdraw support from the CACs rather than building upon an existing program and seeking continuous improvement. While building staff capacity is critical, there are real concerns that the top-down Community Engagement Board process will not really represent the community.]

As part of a continued effort to promote an inclusive and equitable city, the Department of Equity and Inclusion (DEI) began a series of initiatives to address racial equity. To help build capacity, staff members representing all departments throughout the City were joined to form the City of Raleigh Equity (CORE) Team. Together DEI and the CORE Team have developed and facilitated the Racial Equity Trainings for staff, developed a Racial Equity Lens vs. Racial Equity Toolkit guidance document to ensure a shared understanding of diversity, equity and inclusion tools and to strengthen training. With the arrival of Dr. Aretina Hamilton, the work will continue to look inward, but also consider how we can cultivate inclusion and belonging in the wider community. Staff will further elaborate on these current efforts and begin to lay out priorities for tomorrow.

Chief Estella Patterson, along with Gerald Givens of the NAACP Raleigh-Apex Branch and Tony Cope of Moms Demand Action, will provide an overview of a community safety and violence interrupter program. The presentation will include a discussion on the sweeping gun-violence epidemic in our region and across the country; the costs associated with gun violence; the role of community violence intervention; and their recommendation of the model that best fits the City of Raleigh based on common evidence-based violence prevention models.

The City Manager will provide an update on key organizational items.

We will summarize the consensus and discuss next steps.

What  they would like to see having been accomplished a year from today: